Hesshnia is one of the newest provinces annexed by New Germany. It was formerly known as New German forests, and after Weg-New German Reunification it was given independence however as of April 6th 2021. 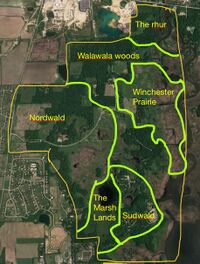 It's strange name comes from the fact that someone at Vladimir Baruh's school always talks about the city in the pacific north west of the United States, also he thinks it's a funny name. It contains The road of HR-2 and parts of HR-3 and HR-4 and has parts of the HH-1 highway system. It contains a large variety of terrain mostly forests, Part of the Lakes mountain range, and large expanses of prairie. It is also where Fort Johnny is located.

Nordwald is German for North Woods, it was used because there was no better name that Vladimir Baruh could have thought of. This are is mostly woods and prairie and is home to Mt. McMann the largest mountain in the Democratic Weimar Republic. It is largely uninhabited except for a costumes station on HH-1.