Sir Charlie Baruh is some kind of terrier who lives in New Warsaw. He patrols the perimeter of the area.

He has a Apartment in New Warsaw, he is roommates with Vladimir Baruh's Grandparents.

He wears a black vest with a sergeant patch over the seam were his front right leg and border guard pin near his neck. In the middle he has a Gold wound pin for being neutered, around his collar he wears the nights cross for taking part in several raids in New Warsaw. 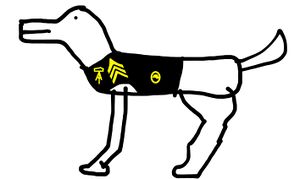