when the uniforms are worn

The Stalhelm, blue service jacket and white trousers are worn when marines are guarding ships, the service equipment stays the same( Y straps, belt w/kriegsmarine buckle, k98k pouches). The stalhelm, and all blue service uniform is used when on a amphibious assault, equipment consists of the standard marine service harness(Y strap, belt w/kriegsmarine buckle, K98K pouches) but may also include: Life preserves green or yellow(only worn on landing stages), Bread-bag(worn in mid stages of assault), Zeltbahn kit(includes new German Standard green Zeltbahn and anti mosquito Zeltbahn. Worn in mid stages of assault). Solders may carry there full marching order but is not required as not to get personal items wet. 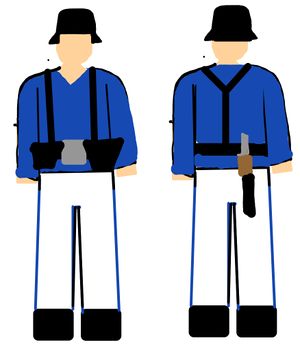 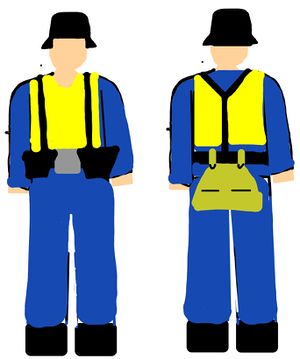 Officer ranks stay the same(unless re-enactmenting then wear the German equivalent of your rank on shoulder boards) The enlisted ranks are called the same thing but with different insignia.

There three classes river, lake, and ocean. All have the same goal but different ways of execution. The multi purpose main training is: get out of boat into the water to avoid enemy fire, get infantry on beach, get machine guns on beach, have infantry take the beach defenses, then live of the land wile waiting for the heer to encircle the enemy or to reenforce or excuse the marines. This how it should go on lakes.

For safety reasons both sides must wait till the marines are 10 feet on the beach or bank to fire, unless the bottom of the river can be felt without submerging ones head and the current is small to non existent.

New Germany has no costal territory's so this training is overlooked.