This division has the most vehicles out of all divisions in the army. The division possesses and operates; the M1A2 "Cobra" main battle tank, 1 Ford 250 1/3 ton truck, and 2 Srpc-1 transport vehicles 1 with cargo hold.

Equipment is a green pistol belt a holster and a springer pistol.

This is art put on tanks. Usually, it is painted on the left outside wall viewing from the front. Varying from tank to tank, women are painted bearing a M-16 Stahlhelm and a German M17 Gas Mask facing toward the enemy when advancing. This is only put tanks because her name is "Lady of the Panzer".

Tanks that bear this art are referred to with feminine pronouns as a sign of respect for Lady of the Panzer. 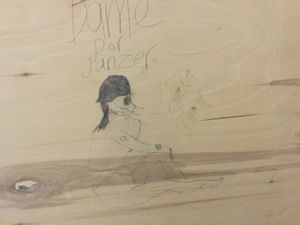 One example of a Dame Dur Panzer