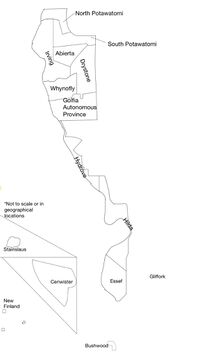 The Federal Union of Wegmat is a nation primarily located in the Chicagoland area in Illinois. Wegmat also has other claims only in North America including New Finland and Little Presque in the UP of Michigan, Cenwister in Wisconsin and Stainslaus in Ponderosa Hills.

The in-provinces of Wegmat are bordered by the Des Plaines River to the West, Thatcher Avenue, or Cumberland avenue to the East. Most of Wegmat is bordered by the United States In Hydrove its bordered by several different streets to the East. South to north Wegmat's largest landmass claims extends from railroad tracks of the Union Pacific Railroad to the Lawrence Line. The province of Madison is not connected with the rest of Wegmat's in provinces. It is on the other end of the Weimarian province of Levare. 3 provinces are located out of the in-provinces along with 2 territories. Stainslaus is the smallest province in Wegmat located included in Ponderosa Hills in the Sierra Nevada Mountains. It consists of a single tree. Cenwister is located on the Baraboo Range outside of Reedsburg, Wisconsin. It is the largest province. with the recent developments in Cenwister, it may become an autonomous province of Wegmat. New Finland is located outside of Champion, Michigan in the Northwoods. It consists of two houses and an island on Fish Lake.

Essef consists of a ridge and floodplains in the Paradise City area before the transition to a flatter landscape from the floodplain remains along the river except in the southern Hilda Highlands and the Cumberland Ridge. Essef has 3 regions, the floodplain, the grasslands, and the Inland Woodlands. Gliffork is not a single landmass rather several houses strung under one authority. Hilda is north of Essef. In the south, it is an extension of the Inland Woods which the cities of Colorado Depot and Isadora are on. North of the WMoT train tracks is the beginning of the Hilda Highlands. Along the Des Plaines River, a small canyon forms up to the Bay of Trees. Past the Bay of Trees, the Thatcher Woods region ends transitioning to the Huppert Woods region. The Hilda Highlands end at Fort Jerome. The Hydrove Gap begins in Hydrove from the southern end of Hydrove where it remains along with the entire province until La Bamboise. At La Bamboise it sticks to the river to make room for the Canpac Range north of La Bamboise. The Hydrove Gap ends at the Golfia border. The Golfia Gap begins along the rive. Inland in Golfia, a large golf course is. The entire land has been landscaped for the golf course. In the southeastern end of Golfia is the Golfian Woods. The Huppert Woods region ends at the northern border of Golfia where the Cornerstone Woods region begins. The Golfia Gaps remains of the Whynofly coast until ending at the Schiller River. The Cornerstone Woods Region is made up of flat woodlands in the east known as the Lost Lake Valley extending from the Schiller River to the north, the Weg border to the east, and Eastern Whynofly is where the valley ends. East of this is the second biome of the Cornerstone Woods region, the Brook Range. The brook range is a less flat area surrounding the Schiller River in Whynfly, Southern Irving, and Southwestern Abierta. Past the Cornerstone Woods Region is the Great Plaines of Schiller. An open grassland that makes up most of Abierta and South Potawatomi, and parts of Drystone and Irving. They extend Bodwatmi to the West to the Weg border to the East with some small woodlands in between. To the north, the end of the plain is the Robinson Woods Region. The Robinson woods has 4 sub-regions. The Great Plains of Schiller has no sub-regions. The first sub-region of the Robinson Woods is just past Irving Park Road in Irving. It is called the Irving March Valley and consists of tall grass and low-lying floodplains. It extends from the Great Plains of Schiller to the Western Weg border on the river. It extends north to the Cumberland Ridge in central Irving, elevations raises along the river 7 Acres south of Crystal Springs. The Cumberland Ridge ends at the Robinson Woods at a converging point with the Inland Valley. The Inland Valley extends to the East Wegmat border on East River Road and ends at the north of the Great Plains of Schiller. The Inland Valley extends south 16 Acreds Southeast of the Crystal River.

Wegmat has a lot of flora throughout the country, including many different types of trees, such as sycamores, oaks, maples, and some pines. Wildflowers and thornbushes make up quite a lot of ground flora. Most landscaping in urban Wegmat is artificial. The highest point of elevation in Wegmat is around 800 feet (243 m) on Mount Hilton in Cenwister and 690 feet in the Hilda Highlands at Point Foxtrot.

File:Geography of Wegmat.jpg
A map published by the Geographical Studies Office of the Wegmat Environmental Ministry.
Retrieved from "https://micronations.wiki/index.php?title=Geography_of_Wegmat&oldid=1078101"
Categories:
Hidden category: