Nicholas I, Emperor of Abelden

Nicholas Kaos KSP KTO SD M1DS GCOP is the current and 9th Emperor of Abelden[1], and was also the 7th Emperor[2], and the 4th person to take the throne overall. Kaos is the current Chancellor of Abelden, having served since 31 August 2018[3]. Kaos was also the only Emperor of Pacem from 2016 to the empire's dissolution in 2019, and during the 2020 restoration. Kaos is also the 2nd Chancellor of Atovia, being elected in July 2020 following Edward Daniels' departure from the micronational community.

Since the formation of the Republic of Abies, Kaos was a major player in the formation of the states that made up its lineage. Starting the 6th of June in 2015, Kaos began his micronational career in Abies as President, having current Emperor Mother Heidi as Vice President. Kaos was introduced to micronationalism through the TV show How to Start a Country made by Lovelian Danny Wallace. Kaos made the Abiean Flag with paper and wood and planted it in the ground in the backyard to his home at the time, and in the park across the street. Eventually, Kaos went on to claim his father's home 64 kilometres to the north, declaring the first state of the republic, Carney, and started transforming the unitary dictatorship into a federal republic. Soon afterwards, the Abiean Civil War broke out between a faction of Abies led by the sister of the President Meghan T., causing a two-day war over the original territory of Abies. Eventually, under the leadership of Kaos, the rebel forces were pushed back, allowing for an Abiean victory. This caused a hiatus of military control in the nation during the war, and eventual full dictatorship in the country afterwards. However, Kaos kept the divisions of the executive, legislative, and judicial branch. Kaos passed his first executive order in Abies soon after the war, with the tongue-in-cheek name "Imagination Proclamation." This order enacted freedom of speech, press, religion, artistic representation, and peaceful protest in Abies. This order also stated that the Abiean government would be sponsoring any artistic, cultural, or scientific endeavours made by citizens. Kaos also successfully formed a great diplomatic basis for Pacem outside the MicroWiki community, before starting to centre itself around the very popular forums.

Kaos also spurred the change of a federal republic to a united constitutional monarchy under himself in the January of 2016. At this time, many citizens were inactive, so Kaos campaigned in the newly formed Abiean Senate to complete the change. However, with the prospect of a civil war, Kaos quickly decided to take control and started to change Abies into the first political form of the Pacemian Reign's infamous namesake; Pacem. He claimed territory on Neptune and the dwarf planet Pluto, which at the time were controversial in the micronational community. Without complex digital designing skills, he made a very poor version of the original 12-Sided Star Banner. Later, citizen Daniel Ediker modified it to appear much more professional. This period resulted in Pacem making a very important ally on behalf of Kaos, the Duchy of Hodiny, which would remain well allies with Pacem until late into 2016. During the middle of 2016, Kaos made another slight change to a micronational ideology called secessionism. From this time until the middle of 2017 did this become one of the greatest successes in Pacemian history, until Kaos collaborated with Artemis Langford.

In the June of 2017, Kaos collaborated with Langford to create a modern version of the British Empire, the Federal Empire of Aarbaro, with Langford as Head of State and Kaos as Head of Government. Until later that year did Kaos keep this occupation, until declaring independence for Pacem from Aarbaro to form the Technocratic Celtic Kingdom of Pacem, which later transitioned into the Second Empire of Pacem during 2018. During April 2018, and eventually ending in the following June, Kaos wrote the Pacemian Constitution of 2018, finishing a long goal of wanting to set up a stable government within the empire. Over the next year, Pacem continued with ever-increasing inactivity, with the only real activity occurring in December when there was an emphasis on meme culture as expressed with Kaos' Sans Party. When inactivity peaked in July of 2019, Kaos deleted the Pacemian Discord server, ending the nation.

In 2020, however, Kaos would eventually begin to feel nostalgic for Pacem and eventually reestablish it on 6 June 2020, exactly 5 years after the foundation of the Republic of Abies. This incarnation of Pacem, the State of Pacem was meant to reflect the maturing of Kaos' political beliefs and compile it into one nation. He founded the nation and immediately began implementing confederalism, direct democracy, and checks and balances in governments, which were all new concepts to the previous Pacemian political environment.

Since the May of 2017, Kaos has been a citizen of the Abeldane Empire and Commonwealth and began his political career as serving as a close advisor to then Emperor Stephen. Following the Emperor giving him a seat in the Reichsversammlung, Kaos was assigned as the Prince Regent by Emperor Stephen. During the late summer of 2017 to January of 2018, Kaos was informed by Stephen that he would be taking a leave and that Kaos was now the acting Monarch. Appointing Patrick Renwick as an advisor to the Regent, as well as the Regent's own successor in case he was to be unavailable, Kaos ruled far and few between due to inactivity from schooling. On 24 March 2018, Stephen abdicated the throne for Kaos, crowning him as Emperor. Kaos has ruled the nation since then with his heir apparent Ervecysarisch Newton. However, on the 15 June 2018, Kaos officially abdicated in favor of Ervecysarisch Newton ending a 92-day reign, the third-longest as of yet.

As a member of the Reichsversammlung, Kaos was originally a member of the Abeldane National Independence Party when he first joined Abelden. Kaos has supported bills more commonly associated with leftist ideals, such as supporting the Abortion Act in April 2018. Kaos would continue to be the longest-serving MR to have a seat continuously, with it lasting until 29 May 2020. This made him the longest continuous serving MR in Abeldane history, however, he would only write a total of 5 acts during this time.

Kaos is also the longest-serving Chancellor in Abeldane history, serving for a total of 800 days as of 8 July 2020. During his two terms in office, Kaos has gone through seven different ministries and two different Emperors, including himself. Due to the relatively high interest in these states, Kaos would focus on Tusmore and Alenshka for economic development, primarily helping with the establishment of local businesses.

Following the dissolution of Pacem, Kaos would establish the newest state of the empire, the Kingdom of Tusmore. He considered it to be a cultural continuation of Pacem, and put much of his effort from October 2019 to May 2020 into ensuring the state's activity. As of present, Tusmore is one of the most active states in the empire, with around 67% of the state being actively involved in government.

On 16 November 2019, Kaos was reappointed as heir to the throne, with the succession being modified to place the House of Kaos following the House of Uberquie in succession. This would eventually culminate to the abdication of Emperor Newton on 29 May 2020, where Nicholas would take the throne once more. As such, he also abdicated from the throne of Tusmore, appointing Connor Stumperth as his regent. He would go on to oversee the June 2020 legislative election, as well as the aftermath of Vorsitzender Patrick Renwick's resignation as Vorsitzender. Following this, Kaos would call an immediate snap election to fill both the vacant offices of Vorsitzender and Stellvertreter.

Following Concordiagate, Kaos was an essential part of the deFreaythification of Abelden as Emperor. He would go on to form the constitutional convention for the largest amendment bill passed in Abeldane history[4]. As the founder of the Confederals party, Kaos has been a heavy confederalist and for the demotion of the role of the Emperor to be purely ceremonial in nature, and is considered an Abeldane progressive.

Kaos was one of the first citizens of the Earth Federal Republic and was able to earn the friendship of the acting president Ondo Alvellë. During his term as president, Alvellë appointed Kaos as the Minister of Culture, to which Kaos remains in the position until the eventual end of the nation. Kaos worked with Alvellë and the General Assembly of the EFR to have the nation join the Konmalehth. Due to the inactivity of the nation, Kaos had been an avid supporter of one last General Assembly meeting in order to completely decide the fate of the nation. Following the commencement of this Assembly sometime in 2017, the server on which the nation was based was abandoned and the nation was considered to be abolished. 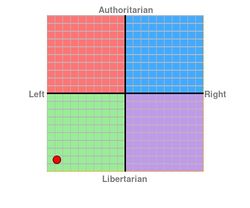 Kaos' political compass as of August 2020.

Nicholas Kaos was born on 18 November 2003 to parents Jeffery and Heidi in Pittsburgh, Pennsylvania, USA. Throughout most of his early life, Nicholas moved between the five states of Pennsylvania, Ohio, North Carolina, Tennessee, and Maryland, until settling down in Maryland in 2011. Nicholas began high school in 2018 and entered a program for the foundations of engineering. He was a four-year Varsity athlete for cross country and track & field, making it to the state championships for cross country and county championships for track & field. He also participates in VeX Robotics, being the current Vice President of his school's club and a former team captain, builder, programmer, and designer.

Nicholas identifies his sexuality as "fairly bisexual" and has been publically out since 2016. Nicholas politically describes himself as a social libertarian with anarcho-communist influence.

Nick was born in the U.S.A. and to later become citizens of several micronations, representing them in their governments, or just supporting the nation as a citizen.

Nicholas has an amateur media career, occasionally producing music and films that are generally unreleased to the public. Nicholas operates on Soundcloud as "bygodnick"[5].

These are the awards and honours bestowed to Nicholas for acts of support, courage, or appreciation towards a micronation.

Pacem: His Imperial & Royal Excellency, His Simpness, Nicholas Kaos, the Emperor of Pacem, King of Veqlar, Lord Protector & Marquis of Nekut, Sovereign of the Order of Dawn