Charlotte of Uskor (Charlotte Louise Katrínsdottir), born August 1991, is the High Queen of Uskor, an Uskorian politician and military officer.
Charlotte ascended to the throne of Uskor as High Queen on the 27th of August 2017 upon the vote of the Allthing, having previously served as Queen of Uskor until her Abdication following the socialist revolution and as the Chairwoman of the Council of State.
Charlotte is also the current Jarl of Ny-Troms. A self-described political warrior, Charlotte has been at the centre of Uskorian politics since Uskor’s inception, with some figures both within and outside of Uskor accusing her of political intrigue. 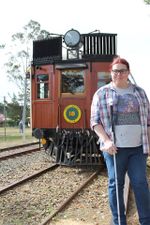 On November 20, 2009 Charlotte was forced by her father to move with him to New Zealand, a deeply traumatic event for Charlotte.

Charlotte and her friend Sir Cinnamon Toastcrunch founded Uskor (then called Zealandia) on February 2010 follwing Charlotte being inspired by reading about Molossia.
Charlotte and Sir Cinnamon laid the foundations and basic constitution of the fledgling Kingdom, which held territory both in Australia and New Zealand.
In 2012 Charlotte escaped from New Zealand and returned to Australia where she dissolved the territorial holdings in New Zealand.

Revolutions and falls and rise of the monarchy

On August 1, 2012 Charlotte lost the crown of Uskor during the Winter Revolution which was a republican coup d'etat.
Charlotte upon realising that she had an opportunity to continue the improvement of her nation defected along with most of the Uskorian population to the republican side of Winter Revolution.
Charlotte served on the Uskorn National Transitional Council and until her election as President, she served as the Prime Minister of Uskor.
Charlotte regained her throne with the help of the Uskorian Security Services in an event known as the February Statskupp which deposed of the republic, she again lost her crown, this time voluntarily in the 2016 Red April Revolution being appointed as the first and only Chairwoman of the Council of State.
The Communist state and system within Uskor was over thrown when the Uskorian People convened an Allthing and democratically elected a new liberal constitution and voted Charlotte to be the new High Queen and as a Jarl.

During the years of 2019 and 2020 Charlotte has twice declared a regency due to ill health or hospitalisation.
The Longest of these regencies was in 2020 when Charlotte was hospitalised for a three to four-week period in a private hospital. 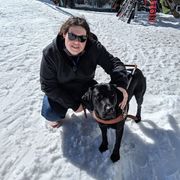 Charlotte with her Guide Dog

Titles, Styles and Honours of Charlotte of Uskor

Charlotte’s title has changed as she has held various offices however her current full title is: