The Uskorian National Flag , (Norwegian: Uskors flagg, Uskorian Merki) is white with an indigo blue Scandinavian cross fimbriated in red that extends to the edges of the flag; the vertical part of the cross is shifted to the hoist side in the style of the Dannebrog, the flag of Denmark.

Prior to the Red April Revolution

The former Flag of Uskor was a yellow Nordic Cross on a grey background. The flag was adopted in February, 2014. Along with the Coat of Arms it made up the primary symbolism of the nation.

The flag is always flown around the clock in Denton regardless of Conditions. It is customarily flown on all major events and public holidays.

The Royal Standard was adopted in June 2014 as the flag to represent the Uskorian monarchy. 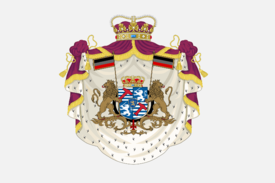