The Empire of Pacem (Flaré: Pocolana kola Pacéman, Irish Gaelic: Impireacht na Pacem, Spanish: Imperia de Pacem) is a constitutional empire founded on 6 June 2015 and is lead by its founder and current leader Yémeraw Nick Kaos l. It has a decently sized territorial claim of about 1.11 squared kilometres. Self-proclaimed as an independent microstate, no UN member or sovereign entity has recognized Pacem's independence, therefore classifying it as what is commonly known as a micronation.

The Empire is made up of 2 federal states and one territory, all claimed by the Yémeraw in an expansionist campaign that continues to this day. It was formed under a dictatorship in mid-2015 under Nicholas Kaos, and slowly transitioned to a more imperial nation. It has expanded its control as far east as the Indian subcontinent and a part of the Indian Ocean, but only as far west as 0.5 kilometers away from the capital city of Moñ.

Pacem comes from the noun version of "Peace" in Latin. This was chosen because the Yémeraw believed that Pacem would never have wars in its history.

The Piscataway Nation was a Native American located in and around the American state of Maryland. In the early stages, it was a small culture around 12,000 years ago. 3,000 years ago, evidence that the nation existed around that time was found in the form of several artifacts.

In 1498, European Contact was made with the Piscataway Nation. Unfortunately, this also meant a time of despair for the Native Americans, as in terms of disease, invasion, etc.

In the Mid 1600's, Maryland was officially declared a colony of the British Empire. It had a tobacco based economy, cultivating it using slaves and indentured servants.

In 1776, Maryland was one of the 13 American colonies to have its delegates sign the Declaration of Independence.

In the 1880's, Thomas Carney founded a small store along a road in a land without much population. The future location of the town of Carney, Maryland.

This era is when Pacem was the Republic of Abies and the Galactic Empire of Pacem. Information has been lost, so some of this may be not true to most extants.

On June 6, 2015, the Republic of Abies was formed. This was a violent, simulationist state, having wars often. It was formed by the current Yémeraw Nick Kaos, who was then the President. The Vice President was a family member, Heidi Tenebaum. Other then that, citizenship was almost nonexistent.

These are the remembered wars of the Simulation Era. They were usually petty in nature, with no one truly fighting for the most part. They were often fought with Nerf guns, or just angry rants through email.

(main article: Abiean Civil War)
The only physical war in all of Pacemian history, it was fought with modified Nerf guns that were much more similar at that point to a BB gun then a Nerf gun.

The Battle of Con was a battle waged at the future State of Con. The rebels won, sending the government back to the Carney territory. Ambushing the federal forces from surrounding foliage, the Rebels shot at General Kaos unexpectedly, causing him to have to fall back behind safeguards. The Rebels overtook the territory and advanced on the General, causing him to retreat to the Capital Province, or what was the past incarnation of the State of Carnegi.

This was the second and final battle other war. The government viciously attacked the rebels, ceasing all rebel activity. General Kaos ambushed the Rebels unexpectedly with an occupying dog, one of the current mascots named Kona, and took land back taken by the Rebels.

Sometime in July 2015, Abies declared war on the Kingdom of Lovely. The leader of Lovely, King Danny l, had supposedly abandoned his citizens. This was under false claim of Vice President Tenebaum, which was found out much later.

Through DDoS attacks, Abies won against the small faction of their military the Army of Abies was fighting against. The Lovely-Abiean War Medallion was awarded to the General and Commander, as they were who fought the war.

In December 2015, an internet troll claiming to rule a micronation. Threatening emails were the only thing waged, leading to the wonder if this was even a war at all.

This short lived government style was simulationist enough to continue claiming celestial objects. That is all the information really kept about this time period. It claimed Neptune, and parts of Pluto. Later, these claims were seen as childish and were quickly abandoned. This was also the first incarnation of any monarchy in Pacem, as well as an organized government.

This is when Pacem became a secessionist micronation. Many alliances and treaties from the Simulation Era had been broken. New, stronger alliances were built, as with the Communitarian Nationalist Socialist Republic of the Definitive Community, and building up on an alliance made with the Duchy of Hodiny. The Imperial Senate, the "beta" Constitution, and the Declaration of Independence had been written.

In late March 2016, Somali Haiti has started hostile tensions towards the Communitarian Republic, building up to when the Pacemian CyberForce attacked Somali Haiti. Over 1 month later, the War ended with Pacem and its allies swarmed in victory against the Somali Haiti Republic.

This is when Pacem entered a peaceful era with no war. During this time, Pacem aged to a year old. This marks a transition period in which Pacem does not seem as a nation to fall in several months, but one that shall thrive for ages.

Marking the beginning of the Era of Peace, the end of the Somali Hatian War was highly celebrated. The Imperial Senate of Pacem decided at 05:00 EST on June 3, 2016, Pacem would withdraw from the war.

This also marks the start of the Pacemian culture. Flaré was formed by the Yémeraw. Star Trek: First Contact became the official movie and Star Trek: Voyager the official show.

The return of Abiean culture arrived on 28 June 2016. The Abiean Flag has made a comeback by becoming the State of Carnegi's official flag. This allows new citizens to see what Abies was like partially. Also during this time, a territory of Pacem known as Abies Woods was designated its name. This, again, shows respect and honor to the history of Pacem, as it is an important part of Pacem's national identity.

Pacem is home to 3 states, 1 dependency, 4 towns, and 2 national parks (Which are considered equal to towns).

The flag of the State of Carnegi

Even though they live on no territory, non-territorial citizens are still group into regions. This accounts for 25% of the population.

The flag of the Territory of Indo

The Flag of the State of Con

The government type of Pacem is classified as a Constitutional Monarchy, following a soon to be finished constitution that can be found here. It has not been fully completed, but the current version has been ratified.

People of the Government

The government is divided into areas of groups and control. The Yémeraw is classified as Group Alpha, and has no leaders of that position. The Yémeraw has control on all groups. The following is a list of the groups and their information. Also, due to all citizens being in the government, this is also how the social order works.

There are currently three Pacemian political parties recognized by the government.

(main article: Economy of Pacem)
The economy is based upon two currencies, the Pacemian Imperil (I$) and the US Dollar ($). I$1 is equal to US$0.005, or US$1 is worth I$200. The Imperil is a sand based currency, with I$1 is equivalent to 28 grams of natural sand taken from a beach, a body of water, or a desert.

There currently is no Secretary of Economy in Pacem, as Pacem lacks the citizenry to build up a complex government.

The nations main export is coding, which truly comes at no cost. Other exports include flora, money to the United States of America, et cetera.

The culture of Pacem is not very varied. Many languages, interests, and ideals are shared among citizens. A majority of the culture highly reflects that of the United States of America, such as an interest in comics, movies, science fiction, the shared language of English, and religious beliefs common in the macronation.

Star Trek, Star Wars, Deep Impact, and other science fiction movies and stories are highly influential. This is the backbone of many Pacemian topics, such as the language Flaré.

Rock is a highly enjoyed genre of music. The national anthem was even a alternative rock song called The Phoenix by Fallout Boy. Rap, Irish punk rock, and alternative rock are some known genres liked in Pacem. Classical music is also listened to often, and is generally appreciated by the higher class of Pacem.

The current national anthem of Pacem is Serene Skies, composed by Nick Kaos. It is a seven second tune of varying notes on a violin in a rather peaceful manner. 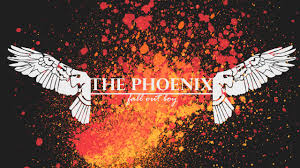 Art depicting one of Yemeraw Nicholas' favorite songs: The Phoenix by Fallout Boy

The official news source of Pacem is the Quo Times website. Pacem also has been mentioned in the DNSR of the Communitarian Republic and the Ërsten Times of Hodiny.

There are many geographic features notable in Pacem.

In Abies Woods, there is a 8.1 metre tall cliff that many American citizens have been severely hurt attempting to go down it. This has been declared a spot of endangerment to residents of Carney and the State of Carnegi.

There is also a small creek dubbed Empire Creek by the Pacemian Geographic Society. It supports a large biodiversity of flora and fauna, including ferns and Red Fox.

Both regions are in the State of Maryland, so they have very similar climates and are listed together.

The climate of Pacem is highly variable. These regions are located in a deciduous temperate forest area, with the temperature ranging from an average low of 6.75 °C to an average high of 18.38 °C. It has a moderate average rainfall of 8.89 centimeters per year, with April being the driest month and September the most prevalent of precipitation.

A graph depicting the average climate in Maryland and Pacem.

Approximately 4,400 kilometers south of the equator, Oceanic Pacem is a little chilly. The average temperature throughout the day is only 56.8 °C, with a high of 16.1 °C and a low of 11.6 °C on average. The average precipitation rate is a rather great amount of 111.9 centimeters per year.

The population of Pacem is mostly of American nationality. This promotes a better shared culture between citizens, as they have had similar experiences during American citizenship. The ratio of female citizens to male citizens is 1:1.

As of the May 2017 count, there are 8 current citizens, with an all time high of 9 citizens.

A line connecting the points of which Pacemian citizens live.

The population is highly Catholics based, the state remains to be secular. This is due to Pacem wanting to embrace all people and cultures.

The entire population of Pacem are native, fluent English speakers. This is the primary language of Pacem, being used in everyday society, diplomacy, and politics.

(main article: Flaré)
Flaré is a constructed language, or conlang, made by Nick Kaos to promote Pacemian culture, and as an experiment to see how languages can effect a society and how making one works. It is what is called a Xenoic language, largely based upon Vulcan and Klingon languages. It also has some influences of Germanic and Romance languages, however, more and more words are becoming more alien.