The Colony of Creatuxia was a Colony of the Empire of Adammia. It was surrounded by Sandbach, Cheshire, UK, and was 79,844m² in size. It was founded on 8 August 2013 and was led completely by High Lord Overseer Sir Damian Parker. As a colony, it had more autonomy than the provinces of the Empire about fifty miles away.

Creatuxia was unique in the Empire as it was a large estate with several fields instead of a standard property comprised of simply a house and a garden. The large detached house was the residence and office of the goveror, the High Lord Overseer. Creatuxia was well-known in the Empire for being a centre of technology and computing. It also had the highest rate of automobiles per capita in Adammia. 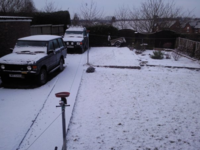 The back garden of Creatuxia Vetera in winter.

The original territory occupied by Creatuxia was a property now known as Creatuxia Vetera (or Old Creatuxia; the name is used by the government to refer to an external location much like with the former territory of Astley Meadow). This comprised of a semi-detached house, its two gardens and a driveway. Creatuxia Vetera was the only Adammic territory to have experienced emigration, with former resident S. Barratt leaving for the UK in November 2013.

A large winter storm struck Creatuxia Vetera on 12 February 2014. Power outages, along with debris from fence panels and trees in the surrounding British town led the High Lord Overseer to declare a state of emergency, the first time this had ever been done in any part of the Empire of Adammia. This was also the first time Sir Damian asserted any micronational authority over Creatuxia.

High Lord Overseer Parker moved out of Creatuxia Vetera in October 2014 and into the territory which comprises modern Creatuxia. After the Office of the Emperor was informed of the relevant details, Imperial Decree XXIX was issued on 30 October 2014, which officially relocated the territory to its current location. However, communications between Creatuxia and Adammia's central government declined and an agreement was made to dissolve the Colony on 19 April 2015.