Her Royal Highness Princess Sarala (born 14 May 2005) also known as Sarala Baishya, is a senior Vishwamitran politician and a member of the extended Purvanchali Royal Family and a first-cousin of the Rashtradhyaksh Dhrubajyoti Roy and Tanishkaa Patranabish. A former head of state of the nation, she had served as the President of the Children's Group between 15 July 2014 and 6 December 2015 and again between 13 December 2016 and 11 April 2017. She currently serves as the Regent of Purvanchal since February 2021.

She became a citizen of the Children's Group in 2010 and rose into prominence in a short period. Following the 2012 General election, she was inducted into the union council of ministers under Prime Minister Dhrubajyoti Roy and was assigned the duties of the Minister of Finance. Her induction into the council of ministers became a matter of loggerhead between her and Tanishkaa Patranabish, who was moved from the finance ministry to the education ministry in order to induct her.

She became the Prime Minister for the first time in 2014 following Dhrubajyoti Roy's announcement not to contest the general election, which led to straight forward election and legacy battle between her and Tanishkaa Patranabish. In the election, she defeated Tanishkaa Patranabish and was able to become the third prime minister of the nation on 21 May 2014. It was under her administration that the first constitution was implemented. However, her tenure was cut short following her resignation from the premiership on 27 December 2014 after a long controversial fight between her and her rival, Tanishkaa Patranabish for a battle of legacy for the power-share within the nation. It was in the same year, on 15 July, that she contested the presidential election after incumbent President Dhrubajyoti Roy decided to relinquish the duties of the presidency following the expiration of his two year tenure. She was able to win the election and was sworn in as the third president of the nation. She was the second individual in the nation to hold the offices of the head of state and head of government at the same time.

Following her defeat and stepping down as the prime minister, she was appointed as the Minister of Provident Fund in the government under prime minister Dhrubajyoti Roy on 11 April 2016 and simultaneously as the Deputy Speaker of the lower house of the parliament. She stepped from both positions on 10 July 2016 and formed her own political party, the Friends Society Independent Party. She also unsuccessfully contested the May 2016 presidential elections against incumbent president Tanishkaa Patranabish. She was named as the first Governor of the Federal Bank on 10 July 2016 and served on that position until her appointment as a state governor. On 18 September 2016, the government under Dhrubajyoti Roy issued the notification of the creation of federal provinces and territories in the nation, following which she was appointed as the first Lieutenant Governor of the territory of Central Guwahati, a position which she held till 13 December 2016. She again unsuccessfully contested the presidential elections in October 2016 against then deputy prime minister Anoushkaa Patranabish for the office of the president. She became the Administrator of Beltola on 27 November 2016 following the resignation of Governor Anirban Phatowali. Sarala Baishya being sworn-in as President for a fresh term on 27 January 2017 by Chief Justice Tanishkaa Patranabish. 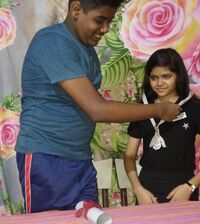 Sarala Baishya being sworn-in as Vice-President by President Dhrubajyoti Roy on 25 December 2017.

Ahead of the general election scheduled in early July 2017, she announced that the pre-poll alliance between the Independent Party and the Freedom Party shall contest the election under her leadership. However, the results of the election projected a hung assembly after the opposition-Secular Party won 15 of the total 30 seats, whereas the rest 15 seats were won by the alliance. President Dhrubajyoti Roy invited leaders of all three political parties and asked them to form an unity government with the leader of the single-largest party being the Prime Minister, while the constituent party leaders being Deputy Prime Ministers. Under the agreement, Tanishkaa Patranabish became Prime Minister while Sarala Baishya and Freedom Party leader Arnab Sil became Deputy Prime Ministers. She was entrusted with the portfolio of Home Affairs. However, the government was meant to be short lived after President Dhrubajyoti Roy announced his resignation on 25 December 2017, thereby making Vice President Anoushkaa Patranabish to be his constitutional successor. In the early hours of 25 December 2017, outgoing President Dhrubajyoti Roy administered oath of office and secrecy to Sarala Baishya as the nation's Vice President succeeding President-designate Anoushkaa Patranabish. She continued to serve as the Vice President until the temporary abolition of office in May 2018.

In the aftermath of the 2018 constitutional coup d'état carried out by then Prime Minister Dhrubajyoti Roy who later assumed the role of self-styled Supreme Leader, she was named as the Prime Minister of the Council of Ministers, a position equivalent to that of the deputy head of government under the presidency of Tanishkaa Patranabish. She also succeeded Tanishkaa Patranabish as the nation's Chief Justice on 3 June 2018. Within months of assuming the role of Chief Justice, she declared the government established by the coup as "unconstitutional" and asked Supreme Leader Dhrubajyoti Roy to assume a constitutionally established position. Following the verdict, Anoushkaa Patranabish was named as Acting Head of State on 11 September 2018 and she remained as the nation's head of state for fifteen minutes until Dhrubajyoti Roy was confirmed as the President by the Parliament. Her tenure as the Chief Justice, which was due to end on 3 January 2019 was extended for a week due to the leave of her designated successor, Arnab Sil who finally assumed the office of the Chief Justice on 10 January 2019.

She was inducted to the union council of ministers under Prime Minister Tanishkaa Patranabish on 6 January 2019 as the Cabinet Minister of Parliamentary Affairs and Law and Justice despite her constant dissatisfaction over not being appointed a Deputy Prime Minister or a Minister holding a top portfolio. She finally quitted the government alongside five other ministers on 13 March 2019 to form the Independent Party. She became the Leader of the Opposition in the 10th Parliament and continued to serve in the position until 29 September 2019 when the Independent Party was once-again merged with the Friends Societal Congress. She was appointed as the Vice President on 29 September 2019 replacing Anoushkaa Patranabish whose tenure ended earlier that day. Apart from serving as the Vice-President, she also served as the ex-officio Speaker of the Parliament. She also served as an ex-officio member of the Council of President Advisers and subsequently as its first Chairman between 14 February and 14 March 2020.

Later in March 2020, she contested the National People's Congress Parliamentary Leadership election and was defeated by Tanishkaa Patranabish in a neck-to-neck contest and went on become the Prime Minister. Her relations with then President Dhrubajyoti Roy strained by the end of April and she was subsequently suspended as a member of the NPC Politburo for anti-party activities. She was also replaced as Vice-President by Anoushkaa Patranabish on 3 May 2020. However, she continued to be an independent member of the Parliament. Her titles and honours were further revoked by the President on 25 May 2020 after she caused disgrace to the leadership of the nation. In February 2021, Princess Sarala was surprisingly named as the heir to the throne of Purvanchal and Crown Princess to her elder cousin Dhrubajyoti Roy who also is the reigning Rashtradhyaksh of Vishwamitra. She subsequently also became the Regent of Purvanchal and Grand Mistress of the provincial honours.

Since her re-instatement as a royal, she has actively supported the nation and contributed to its development and welfare of the people. She was named as one of the nine National Heroes through a royal decree issued on 22 November 2021 for her highest services towards the nation as a former head of state and government.

Other state and territorial honours

Ribbon bars of the orders and decorations that are worn regularly by Her Royal Highness Princess Sarala, the Princess Anandarajakumari, Princess Regent and Crown Princess of Purvanchal are noted in accordance with customary Vishwamitran conventions applicable to the occasion, the location and to the form of dress worn. The protocol followed for the arrangement of the ribbon bars include that of the national orders as per seniority, followed by the state orders as per seniority of states and orders, and lastly by medals and decorations.