From MicroWiki, the free micronational encyclopædia
(Redirected from John I of Baustralia)
Jump to navigation Jump to search

John (Jacob Patrick, born 7 June 2003) is King of Baustralia and of the colonies of the Baustralian Empire since 20 June 2017. He was also the Prince of Cumberland from 4 November 2017 until 10 February 2018 and once again from 9 March 2018 to 31 May 2018, when the Kingdom of Edstmae was dissolved. He also held the title of Emperor of Ostreum until December 2020. In certain micronations requiring the use of a full civilian name, John Caravaggio III is used in reference to his regnal name, and both his father and grandfather, both named John.

He also holds the title of King Emeritus of Kapreburg from 24 July 2019 after giving up the Dominion of Kapreburg, and the title of Crown Prince of Sayville in the Kingdom of Sayville. He held the title of Emperor of Ovrestlia from 21 April 2020 to 23 April 2020, co-reigning with Aggelos I and Alcibiades I, as well as Duke of Brighton in Ikonia, and both a Count and Baron in Vishwamitra, formerly under the baronial title of Caravaggio.

Formerly King Jacob I, he was born in Toronto as the first child of Their Royal Highnesses the Duke and Duchess of Kingston, and serves without pay as an Admiral of the Fleet in His Royal Navy.

John was born at Sunnybrook Hospital, in Toronto, Ontario, on 7 June 2003. He is the eldest son of the Duke of Kingston and Susan Garsnell. He weighed 1 pound 11 ounces (0.77 kg), and spent a half of a year in the neonatal intensive care unit. Two years later, his sister, the Duchess of Concord was born.

Though John grew up with his family being Catholic, he is an Anglican. He was baptized on 22 April 2018, and confirmed on 20 January 2019 by the Right Reverend Charles Masters, alongside Sir John Timpson, and the Lady Smith.

He formerly lived at Concord Palace working as a customer service employee at a supermarket before moving to Wabasso. He took work for six months as a machine operator at a local firearm factory. He currently works at a quick service restaurant in the area.

John is proficient in ten programming languages, and two markup languages, as he has been programming since he was 10. He knows HTML, PHP, CSS, Javascript, Visual Basic, BASIC, Microsoft C#, C++, Java, Batch, Markdown, and Wikitext. He has used these skills to form the crown corporation Dossier, which has programmed their website, and also manufactures military uniforms. 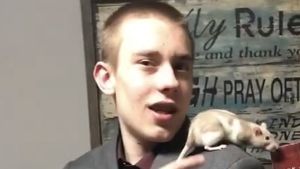 The late Stella, perched on the shoulder of King John.

Fond of animals, John grew up with multiple cats, the most recent being George, who died on 21 January 2022. He enjoyed the company of Bailey, a Havenese dog and mascot of His Royal Navy, age 15, prior to his move. Stella, the second fancy rat he's owned, died around 6:00pm EST on 4 July 2020.[1] He now lives at Wabasso House, connected with Towerhill Farms, a cattle farm in Wabasso with Max, a German Shepherd puppy, adopted after the death of Cisco, the former mascot of the Baustralian Medical Branch and a german shepard of 12 years.

A fan of country music, John plays acoustic guitar. Inspired by the likes of Johnny Cash, Waylon Jennings, and Buck Owens, he started playing guitar at age six. At age fourteen, he drastically improved his skills as a guitar player, playing a worship song on Christmas for his church.

Also a fan of classic rock, exposed to by his father, he enjoys the music of Led Zeppelin, AC/DC, and Van Halen. In terms of Christian music, while still liking the contemporary variety, he prefers traditional music such as gospel and hymns. For a point in his childhood, he experimented with a drumset, but never pursued this.

His favourite country song is Ring of Fire by Johnny Cash, and favourite Christian song is How Great Thou Art.

John serves as an Admiral of the Fleet, and ceremonially holds the equivalent ranks within the other forces. He is the titular head of the navy as Lord High Admiral, and Commander-in-Chief of the Baustralian Armed Forces as a whole.[2] 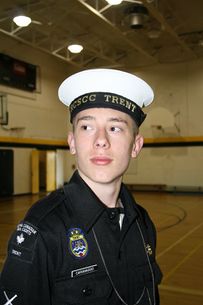 John in uniform at the 2018 cadet annual ceremonial review

He has received the award for Best Junior Cadet at the Annual Ceremonial Review, two months after joining late. The next year, he won the Best Junior NCO award, as well as the Best Personal Drill award.

He has received the qualifications for CANSail1, and Standard First Aid and CPR C. He also received the cadet levels of Distinguished Marksman, and Excellence Fitness incentive. In July 2017, John attended the Basic Drill and Ceremonial course and in July 2018, he attended the Drill and Ceremonial Instructor course. He aged out of the cadet organization on his 19th birthday.

On 25 November 2019, he was appointed Commander of the Imperial Navy North American Command, and in December 2019, John I accepted an honourary commission as Admiral within the Molossian Navy after completing studies at Spyglass Hill.[3]

It also saw the 2019 Kapresh constitutional crisis where the vice president of Kapreburg, deputizing for the absent president in an attempt to cause Baustralia to fail, gave the Crown the Republic of Kapreburg. This was unconstitutional under the Kapresh constitution which made this an illegal annexation, starting a war with the government of the Republic of Kapreburg. The land was set to be returned after Parliament passed the Kapreburg Act (2 John 1 c. 13), and was returned officially on 24 April 2019.

Described by John as the most eventful year yet, his reign in 2020 saw the COVID-19 pandemic, the Baustralian Civil War, and the official end to the Baustralian War. Prior to the 2020 Baustralian general election, he saw the announcement of long-time friend and 1st Prime Minister, Sir John Timpson, that he will not be running for a fourth term as Prime Minister, before being defeated by one vote in the 2020 Conservative leadership election by Sir Nick Sullivan set about by Aidan McGrath, later declared a persona non-grata.

King John has not yet been coronated, and the coronation was planned to take place by July 2020. This was abandoned due to the COVID-19 pandemic and is postponed until further notice[4]. It was been speculated that the coronation will take place by late 2022, then with the death of Elizabeth II and acension of Charles III, it was rumoured the coronation would take place shortly after Charles' coronation. John I has granted assent to 264 Acts of Parliament, and is on his 6th year of reign.

Main article: List of titles and honours of King John of Baustralia

John used to be a Stranger Knight of the Order of the Diaconus, but due to many land claim disputes lost and regain the order. On 15 January 2019, the King of Ikonia was made aware that John believed that Ikonia's colony, Astrax unfairly claimed Fox Islands land, this dispute leads to John annexing all of Fox Islands, which resulted in him ultimately losing the Order. Almost two months later, on 2 March 2019, he was reinstated. On 4 April 2019, the news of the foundation of the Dominion of Kapreburg caused the King of Ikonia to revoke the Diaconus of John once again.

These are the ceremonial dress uniforms worn by John.