His Royal Navy (HRN) is Baustralia's naval warfare force, responsible for the protection of the waters and for transporting planes and army corps through the water. The first formed service branch, HRN is known as the Senior Service. HRN has always been the strongest force, even though the least practical service by water percentage.

The HRN is the most prominent force by strength, and by usage in the Baustralian Conquest. The militia that formed the Baustralian Armed Forces – and subsequently, His Royal Navy – paraded as a naval militia by the order of the Crown. It was formed on 2 July 2017 by John with Sir John Timpson named the Lord High Admiral. December that year, the Admiralty was dissolved in favour of one commander. Timpson was named Commander His Royal Navy.

In February 2018, the Admiralty was reformed by the Crown, and John was self-appointed as Lord High Admiral. Timpson was named Commander His Majesty's Fleet Baustralia, giving him similar duties as Commander His Royal Navy. He was also named First Sea Lord. In March 2018, an offer was given to Wangatangia to have the Baustralian Armed Forces parent the Wangatang Task Force, effectively forming the Wangatang Fleet division. It was later dissolved when the last Wangatang ship was decommissioned.

Notable members of His Royal Navy include all Prime Ministers except Aidan McGrath, who served in the army and is no longer a citizen of Baustralia, the King of Gradonia, the King of Kapreburg, the King of Northwood-Oregon, and the Rashtradhyaksh of Vishwamitra.

For ratings, the system is based on the RN, adding ordinary rate, with RCN-style insignia. As the RN, ratings from leading rate to ordinary rate, the word 'rating' is replaced by their trade, or rate. Chief petty officers may also use Chief rate.

Unofficially, ship's cats accorded ranks may be known as, in the case of a cat holding the rank of Chief petty officer, chief feline. 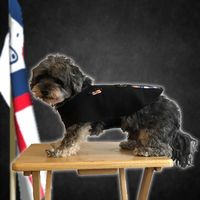 Bailey in No. 1B (Service) Dress

His Royal Navy's mascot is Chief canine Everspring Bailey. Owned by the Princess of Kingston, he is a Chief canine (equivalent to Chief petty officer), and was stationed to the Baustralian Corps of Canine Handlers before it was dissolved. He now belongs to HMS Promise (S5).