Uniforms of His Royal Navy

Officer's uniforms are uniforms worn by petty officers and above (OR-6 to OF-10).

The full dress uniform is a uniform worn by very few members of His Royal Navy, only being able to be issued to the Royal Family and First Sea Lord. It consists of a navy blue double-breasted tailcoat with standing collar faced white with gold edging, worn with gold shoulder boards, and gold-laced blue trousers. Either shoulder boards or epaulettes are worn, and similarily either a peaked cap (or for females, a tricorne) or a cocked hat are worn with this order of dress. A sword belt shall always be worn with this order of dress.

This is the formal uniform worn on ceremonial occasions. For all commissioned officers it consists of a double-breasted, navy blue tunic with three rows of two buttons; matching trousers; white shirt and black tie; blue peaked cap; and black leather shoes. It is divided into 1A (with medals and bearing arms), and 1B (with medal ribbons). Female personnel may wear skirts except when carrying a sword or rifle.

This mess dress is worn in the evenings for dining. 2A is the formal evening dress for ceremonial dinners; it consists of a navy blue mess jacket with a white waistcoat with miniature medals. 2B is "mess undress" for other mess functions, and is worn with a black cummerbund and miniature medals. 2C, "red sea rig", is worn for informal evening wear on board ship; it consists of a white short-sleeved shirt, worn with shoulder boards, without medals and with black trousers, black shoes and a black cummerbund. 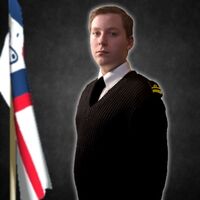 A warrant officer in No. 3C uniform

This is worn all year round for general duties. It consists of a white shirt with rank insignia on the shoulders and an appropriate headdress. For officers, 3A dress includes a long-sleeved shirt and tie, while 3B includes a short-sleeved shirt but without the tie. 3C is the same in all respects as 3A but with the addition of a navy blue woollen jersey. The beret may be worn with this dress only on certain occasions.

This is the battledress of His Royal Navy, and for 4A, wear a navy blue t-shirt with a blue shirt worn over with a black jacket also worn. Ankle boots and blue cargo pants are worn. For 4B, it is the same without jacket. A beret, peaked cap, or ship's baseball cap may be worn.

This is the operational dress of the HRN and consists of uniforms approved by the Admiralty for each branch requesting. Used by medical staff for medical clothing, Naval Air Arm staff for flight suits. For the rest of the navy, either army combats with naval slip-ons.

Naval officers and senior NCOs wear a white equivalent uniform except full dress. For No. 1AW, and 1BW, a white bush jacket is worn with a white t-shirt and white pants and shoes are worn. No. 1C is the same, except where a high-collar jacket replaces the bush jacket. For No. 3BW, white shorts and white boat shoes are also worn.

This is the formal uniform worn on ceremonial occasions, and is a traditional navy blue sailor suit, with matching bell-bottom trousers; white square-neck gun-shirt and lanyard; white seaman's cap; and black leather boots. It is divided into 1A (with medals and bearing arms), and 1B (with medal ribbons). Female personnel may wear skirts except when carrying a sword or rifle.

The mess dress is worn in the evenings for dining. It consists of black trousers and shoes, a black belt, and a white button-up shirt. A black bow-tie is worn. The seaman's cap is worn outdoors.

No. 3 dress is the service uniform. It consists of black trousers and shoes, a black belt, and a white button-up shirt. A white seaman's cap is worn. If No. 3B is called, a blue woollen pullover is worn.

No. 4 dress is the combat uniform. It consists of black cargo trousers and boots, a black belt, and a blue button-up shirt. A ship's ball cap or beret is worn. If No. 4B is called, a blue woollen pullover is worn.

No. 5 dress is the camouflage combat uniform. It consists of multicam cargo trousers and black boots, a blue stable belt, and a Multicam blouse. The beret is worn.

Ratings wear a white equivalent for Nos. 1, 2 and 3. For No. 1, red insignia is replaced with blue insignia.