The Baustralian Armed Forces (BAF), or the Baustralian Forces (BF), are the armed forces of Baustralia. This institution comprises of sea and land elements referred to as His Royal Navy (HRN) and Baustralian Army (BA), respectively. Personnel may belong to the Reserve force or the Regular force.

The Baustralian Armed Forces have also engaged in peacekeeping with the League of Nations, with tours in Mandatory York, and the Fox Islands. They assisted with the Baustralian and Kapresh Civil War, as well as engaging in the Princetin conflict. 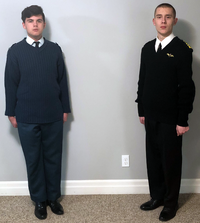 Lord Smithfield, former Chief of the Defence Staff, and John I, Commander-in-Chief

The BAF is commanded by the sovereign and head of state, John I as Commander-in-Chief, who gives commands to the Chief of the Defence Staff, Admiral of the Fleet Sir Harrison Pickles, who will act upon, or broadcast these commands. The CDS also has the authority to give key commands. The King, however, remains the ultimate authority of the military, with officers and personnel swearing allegiance to himself.

The CDS is the professional head of the armed forces, the Defence Board, and is an appointment that can be held by an admiral of the fleet, or a field marshal. From August 2018 to January 2022, those who were appointed to the position of Chief of the Defence Staff, wore the rank of admiral, general, or air chief marshal.

His Royal Navy's titular head is the Lord High Admiral, sovereign, and head of state, John I. The navy's professional head is the First Sea Lord and Chief of the Naval Staff, Admiral Sir Nick Sullivan. The Admiralty is the central command of the navy.

The Baustralian Army's titular head is the sovereign, and head of state, John I. The army's professional head is the Chief of the General Staff, General Sir Greg Watts. The Army Board is the central command of the army.

Lined up in seniority from left to right, are the colours used by all units of the Baustralian Armed Forces.

The Baustralian Armed Forces wear uniforms based on the Canadian Distinctive Environmental Uniforms, as well as the United Kingdom's uniforms, both current and former. The navy wears a double-breasted jacket, with gold sleeve lace, and gold insignia for NCMs, and in some uniforms, shoulder boards. They, unlike the other service branches, wear NCM insignia on the left sleeve only. The army doesn't wear sleeve lace but rather shoulder boards for officers, and standard gold insignia for NCMs.