Order of the Gadus

Appointments are made at the sole discretion of the Sovereign, and like the Order of the Garter, appointments are usually made on St. George's Day (23 April), as the patron saint of Baustralia is Saint George. Honours may also be released on New Years.

The sovereign may only appoint 24 of his citizens, though may appoint as many supernumerary knights – members of the Royal Family, and foreign monarchs – as he wishes.

The order's emblem is a gold (yellow) belt, with the words A•BENE•PLACITO (Latin: From one well pleased) in black lettering.

Ribbon bar of the Monarch's Decoration

The order of the Gadus originally was founded as a decoration from the Monarch, called the Monarch's Decoration, with the same structure as today. It was changed to a order of chivalry, with appointees being a part of the Gadus knighthood.

When the order was changed, it was still called Monarch's Decoration, but was due for a name change. The name was planned to be 'Most Noble Order of the x' and the last part was not known yet. After thought, on 9 April 2018, CADVS (GADUS in modern Latin) was chosed as it is the Latin word for cod.

The member, upon appointing, may wear a four-inch (10.16 cm)-wide sash worn over their left shoulder to their right hip. The arms of the Order may be worn on this sash on the left breast, unless in military uniform with medals. Also, a breast star may be worn with the sash. Pendant from the bow on the sash is the royal cypher encircled with the circles of the Gadus.

Membership is considered a personal gift of the Sovereign under his terms of Chivalry. The member must be faithful to his beliefs, whether they are religious beliefs or not, hold fair morals, and also have loyalty to the Crown. Should a member fail to do this, he may be degraded.

A degradation of a member is done in a ceremony where members proceed to the banners, where the plate and banner is thrown onto the floor, and kicked to Ostreum – thereby soiling the banner – to be burned. Members degraded are Aidan McGrath, and Abrams I of Ikonia, both for annexing Fox Islands. In 2020, Mecca Thompson and Reagan Greenson were degraded after committing treason and conspiring to commit mutiny. 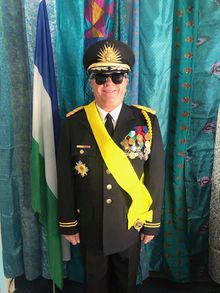 His Excellency Kevin Baugh KG OBE wearing the Order of the Gadus riband, star, and ribbon bars of the Orders of the Gadus and Baustralian Empire (note the order is displayed incorrectly)