Orders, decorations, and medals of the Baustralian Empire

The orders, decorations, and medals of the Baustralian Empire comprise a complex system by which Baustralians, and imperial subjects, are honoured by the sovereign for actions or deeds that benefit their community or the country at large. It is modelled on its British counterpart and includes dynastic and national orders, state, civil, and military decorations; and various campaign medals. The monarch in right of each province also issues distinct orders and medals to honour residents for work performed in just their province.

The monarch is regarded as the fount of all honours, acts as the Sovereign of all of orders, and conducts inductions or presents medals. The governor general also sets out via Order in Council the order of precedence for the wearing of insignia, decorations, and medals. 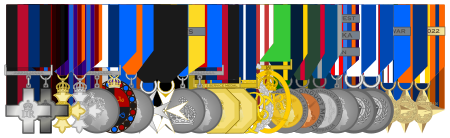 Campaign medals are awarded to persons involved with certain conflicts, either through military service, or civilian service attached to a military unit. Medals are awarded by the Baustralian Armed Forces on behalf of the sovereign through their military commissions, or by multinational forces organizations such as the League of Nations. They are ordered by date of conflict.