Cangun Llus, officially known as the Overseas Territory of Cangun Llus, was a Vishwamitran overseas territory located in Northern England. The territory was annexed as a part of the "Treaty of Land Exchange" signed between the State of Vishwamitra and the Empire of Aenopia on 18 February 2021. As a part of the exchange, Bryn Glaw was annexed by Aenopia. Bryn Glaw was dissolved alongside Cangun llus and ceded back to India following the termination of the Land Exchange Treaty between Aenopia and Vishwamitra on 13 February 2022. Cangun Llus was annexed by the Commonwealth of New Virginia on 24 April 2022 under the name of Hellae.

Cangun Llus consists of a grassy hill approximately 124m² (0.071 hectares) in size. Cangun Llus borders the Qaflanan territory of Helyg Cwsg and the Aenopian territory of New Llandudno and Subsidiaries to the north-west and north respectively. 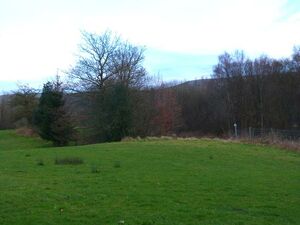 Cangun Llus is a rich and varied habitat, containing a wide range of plants, mostly large mature trees and supports a large number of animals especially birds such as Wrens, Blue Tit, Robin, Blackbird,[1] Song Thrush, Bullfinch (declining in numbers in the UK), Greenfinch, Jay and Pheasants. Alongside birds, other mammals can often be seen in the area surrounding Cangun Llus. Roe Deer are now seen on the field next to New Llandudno regularly, whilst Foxes, Rabbits and occasionally hedgehogs are seen.

Cangun Llus has a temperate climate, with temperatures usually being in the range of 2 °C - 7 °C in winter however can drop as low as -11 °C. In summer, the average temperature range is 12 °C - 21 °C, but can rarely reach as high as 33 °C. Winters are characterized by rain and, in recent years, large downfalls of snow. Summers are warm and humid with occasional heavy rainstorms, however, there are usually only about one or two thunderstorms per year.[2]