Duke Farhaz Hazarika (born 6 October 2003) is a Vishwamitran politician and noble who served as the Prime Minister of Vishwamitra between 11 September and 21 October 2021 succeeding Ștefan Marius Snagoveanu. He served as one of the two Deputy Prime Ministers alongside Michal Nowacki and has been in office between 18 June and 11 September 2021. He is also the National President of the ruling National People's Congress party and it was under his leadership that the party won two consecutive by-elections to the Parliament.

Farhaz Hazarika was born on 6 October 2003 in Guwahati, India and is the youngest child of his parents. He has an elder brother named Fardeen Hazarika (born 2001) who is also active in Vishwamitran local politics. He is the maternal cousin of Abayat Ibtiyaz, a junior minister in the union council of ministers. He is currently pursuing his under-graduation degree course from a prominent college in his homecity of Guwahati and is a classmate of Rashtradhyaksh Dhrubajyoti Roy and Grand Chamberlain W. Pranit Singh. 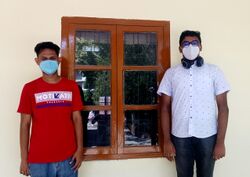 Farhaz Hazarika was introduced to micronationalism by his friend and classmate Dhrubajyoti Roy after gaining knowledge and interest in micronational politics. He formally joined Vishwamitra as a citizen in January 2021 and soon rose to prominence because of his close friendship with the Rashtradhyaksh. Within days of joining the nation, he was offered a position in the caretaker government led by Prime Minister Ștefan Marius Snagoveanu, which he graciously accepted. He was formally appointed as a Minister of State (Independent Charge) for Social and Citizen's Welfare on 28 January 2021 and was also entrusted with the additional duties of the Minister of State in the Ministry of Foreign Affairs and International Relations three days later on 31 January 2021.

He contested the March 2021 Vishwamitran general election from the Basistha City parliamentary constituency of the state of Basistha and was unopposed elected to the parliament. Following the victory of the National People's Congress in the election, he placed an important role in the formation of the government and the appointment of Ștefan Marius Snagoveanu as the Prime Minister. With the formation of the ministry, he was entrusted with the duties of the Minister of Home Affairs, Planning and Public Grievances. He became the third most senior member of the cabinet after Prime Minister Snagoveanu and Senior Minister Prince Abhiraj. He was appointed as a Member of His Majesty's Privy Council on 23 May 2021. In a cabinet reshuffle which took place on 18 June 2021, he was appointed as a Deputy Prime Minister alongside Michal Nowacki.

With speculations of a potential change of guard, Prime Minister Snagoveanu announced his retirement from politics after he was offered to take of a more prestigious constitutional job. Farhaz Hazarika became first in line to succeed him as Prime Minister and soon the formal announcement was made that he would be succeeding Snagoveanu as the nation's Prime Minister in mid-September 2021. On 11 July 2021, he became the National President of the National People's Congress succeeding Snagoveanu. He was assigned the additional duties of the Minister of Education on 6 August 2021 after serving minister Daniel Lee was removed from the cabinet.

He was re-elected to office for a second term on 22 November 2021 following the unprecedented victory of the National People's Congress in the November 2021 general election. His second term in office can be described as one with many hurdles and events. His leadership came to stake after two of his ministers - Rory McPhail and Jayden Dagsa went against him due to his failure to introduce further engagements and activity in the nation. This ended in him losing the position of the party leader and was succeeded by McPhail as the President of the ruling National People's Congress. It would under McPhail's leadership that the rise of the opposition Social Democratic Party was found and the party succeeded in winning four seats of the House of the People in the by-elections held in January 2022. However, Prime Minister Hazarika's second administration was marked by serious inactivity and constitutional failures. Finally, on 17 March 2022, Rashtradhyaksh Dhrubajyoti Roy addressed the nation in which he announced that he shall be assuming executive powers within the nation but also appointed him as the Chairman of the Council of Ministers and in-charge of several important ministries.

By May 2022, the situation seemed to be back to form and intentions of a mid-term election was made. However, this ended up in the filling of the vacant seats of the parliament and the dissolution of the interim administration. Farhaz Hazarika was elected as the Prime Minister for the third term by the members of the parliament on 12 May 2022 and formed his third cabinet. His current administration has been instrumental in several developments within the nation including outreaching diplomatic relations.

Vishwamitra and its states

Ribbon bars and badges of the orders and decorations that are worn by Duke Farhaz Hazarika are noted in accordance with customary Vishwamitran conventions applicable to the occasion, the location and to the form of dress worn. The ribbon bars are worn according to the protocol and the precedence of the wear as issued by the Chancellery of the orders. It is to note that the ribbons of the foreign honours are worn below the national and state honours of Vishwamitra. The badges of the foreign decorations are not worn regularly except for special occasions.