Weg Ways is a government-owned company that operates a transportation system of bikes pulling wagons. The vast system is used by many Wegs to move around Wegmat without having to pedal. Weg Ways has tried to replace their manual bicycle fleet with motor dirt bikes, the first dirt bike car pulled passengers from Cape Chad to Crystal Springs in 7 minutes. The company is sometimes called a railroad even though it does not use any vehicles that run on rails. The system is made up of 6 lines.

Weg Ways reopened in mid-2021 with a service 104 service from Xavier to Darkwater. In December 2021 Weg Ways announced that rail service will open on an unused portion of the Canadian National railroad, the Service will run from True Rainbow in Weimar to Common Washington. Service was once again interrupted by the Midlothian War after civilians were barred from entering Essef and Madison by a occupation force.

Wagons pulled by bikes are usually the Pass O-2. A wagon that has been modified for passengers. These wagons can fit 2 people.

Weg Ways uses 2 Trek F-2 bikes one is an F-2 and the other is an F-2 Disc. They are 21-speed bikes that are commonly used by the Wegmat Government.

There are 45 stations in operation. 4 are international, in Weimar and the Chaveleir Union. 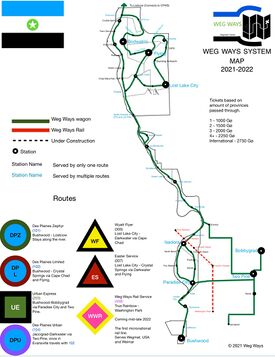 They are 6 routes that are operated by Weg Ways. The longest one is the 101 Des Plaines Zephyr. The Des Plaines Zephyr stays along the river traveling from Bushwood, through Levare back into Southern Essef where it stops for longer in [[Paradis