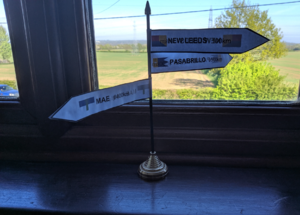 Zabëlle Skye, who was New Eiffel's head of state as 'Prince Zabëlle I' at the time, founded the Shrek Super Party of Essexia on 14 February 2020 after being involved with Essexia since September 2019.[2] After his satirical campaigning (including a campaign video[3] and release of his manifesto)[4] the party received 13 votes, which equated to 8% of the total vote share. As per Essexian electoral law, this entitled them to one seat in the Parliament of Essexia, and one position in the Cabinet of Essexia. Zabëlle was thus made a Lord of Essexia, becoming known also as Lord Zabëlle of Essexia, and being made Minister of Culture, a position which is widely regarded as being a perfect platform for the implementation of his ideas.[5]

Earl Finn of Hawarden, the Foreign Minister of Essexia, proposed a treaty of mutual cooperation to New Eiffel. Key points include a non-aggressive pact, foreign aid and respect. As New Eiffel's was going through political turmoil, Prince Zabëlle I signed it instead of the head of government or Minister of Foreign Relations. The treaty was approved by Parliament and signed by Zabëlle I on 14 April 2020.[1]

One of New Leeds' two sister cities was Danko House. It was obtained through phase one of the GUM Sister Cities project on 15 April 2020.[6].

Zabëlle Skye, former Prince of New Eiffel, had stated he held a close personal friendship with Lord Matthew of Essexia.

Both New Eiffel and Essexia are members of the Grand Unified Micronational.