From MicroWiki, the free micronational encyclopædia
(Redirected from Carshalton Sector)
Jump to navigation Jump to search 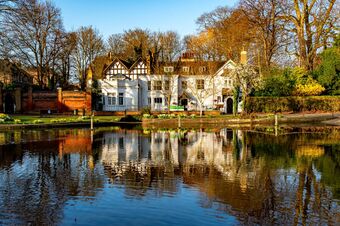 A picturesque view in Carshalton, looking across the Upper Pond to Honeywood House

The Carshalton Nations are the sector or "civilisation" of micronations based mainly in and around the British town of Carshalton in south London. Other than the original kingdom of Rushymia, all of the Carshalton Nations have so far been linked by the involvement of members of the House of Austen. The Emperor of Austenasia holds the title Great King in Carshalton to reflect their suzerainty over the other nations in the area.

The Carshalton Nations in their most inclusive definition are generally accepted to consist of:

The Slinky Empyre and Free State of Renasia have also had land claims bordered by Carshalton (Tincomarus Department and the Zone, respectively), but are not generally considered to have been part of the Carshalton Nations.

By mid-2010, Austenasian suzerainty had been extended over Orly and the Midgets, and the three nations began to be collectively referred to as the Carshalton Sector. Gradually, this term also began to be used to refer retrospectively to the historical micronation of Rushymia. On 12 May 2012, Declan I, II & V formally recognised his leadership of the nations in Carshalton by adopting the title "Shahanshah ("King of the Kings") of the Carshalton Realms, a title held ex officio by the Austenasian Monarch. Upon the ascension of Jonathan I to the Austenasian Throne, he changed the wording in this title to "Carshalton Nations", a phrase which has since become the standard descriptor for the sector.

The first recorded micronational activity in Carshalton was in October 1995, with the foundation of Rushymia. This nation, based in Rushy Meadow Primary School, is very unlikely to have been known of outside of those immediately involved with it. Rushymia transitioned from a military dictatorship into an absolute monarchy before dissolving as a centralised government in September 2000, although autonomous cultural remnants of the micronation lasted until 2006 in the form of the Quietarians.

The Midget Empire, founded in September 2002, quickly took over the political vacuum left by the fall of Rushymia in Rushy Meadow. This stratocratic despotism - which, as with Rushymia, began to resemble an absolute monarchy more and more towards its end - lasted until September 2006, when central government quickly collapsed, although isolated political and cultural remnants remained until early 2007. The memory of Rushymia and the Midget Empire remained, and ultimately helped to inspire the foundation of Austenasia on 20 September 2008.

Within six years, Austenasia had grown to an enormous extent, spreading throughout Great Britain and around the world. Austenasia inspired the foundation of Orly in 2010 and Wildflower Meadows in 2016, and annexed the Midget Nation-in-Exile (a micronation comprised of former members of the Midget Empire, founded in 2009) in April 2011. Since the Liberation of Orly in 2013, Austenasia has been viewed as the guarantor of the independence of the Carshalton Nations from outside interference, and holds a certain pre-eminence over the remaining independence nations, Orly and Wildflower Meadows.

The first time a large amount of British residents of Carshalton became aware of micronations in Carshalton was in January 2009, when the local newspaper (the Sutton Guardian) printed an article on the founding of the Empire of Austenasia. The following year, the number of locals with knowledge of Austenasia rose drastically; Sutton Council recognised the Austenasian nation in March 2010, the Austenasian Civil War resulted in over one hundred local students enlisting in either the Austenasian Army or Carolinian militias (with many more becoming aware of the conflict), and in July of that year the nation of Orly was founded by regular visitors of a local park after some of them were inspired by Austenasia to form their own nation.

in May 2011 local MP Tom Brake held a meeting with HIH Crown Prince Jonathan to discuss Austenasia's relations with the UK. This eventually led to another article about Austenasia being published in the local newspaper in September 2011. The Sutton Guardian published two more articles on Austenasia in February 2013 for the Coronation of Emperor Jonathan I and in July 2014 for the annexation of the Zone.

On 4 October 2022, Emperor Jonathan I in his capacity as Great King in Carshalton and King of Rushymia issued a decree establishing a new calendar era, the year of Carshalton, specifically for the history of the Carshalton Nations, computed from the epoch of September 1995 with the first entry into the Playground (or, more accurately, Key Stage 2) of General James and Warlord Ferengool. This therefore places the founding of Rushymia (c. October 1995), the first Carshalton Nation, early in the year of Carshalton 1. Each year on the calendar starts on the first Monday in September to fall on or after the second day of the month: