Carolinianism was the political movement dedicated to the ascension of the then Princess Caroline to the Austenasian Throne. 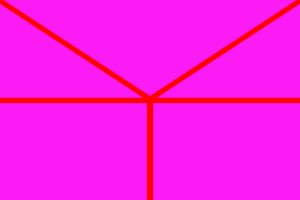 A flag designed by Princess Caroline for the advancement of her claim during the civil war.

Many embraced Carolinianism because they believed parliamentary interference with monarchical succession to be illegitimate, and many others joined the Carolinian side in the Austenasian Civil War for a variety of reasons, some seemingly for attention.

After the defeat of the Carolinians in the Austenasian Civil War, Princess Caroline officially withdrew her claim. The Carolinian claim then theoretically passed to the then Crown Prince Jonathan, but he denounced it the day afterwards, after which it would have passed to HIH Princess Christine, the eldest sister of the former Emperor Terry and the current pretender. She has never made any attempt to take up the Carolinian claim.

On 14 October 2009, Emperor Terry I relinquished his title of "Duke of Highland" in favour of Esmond McLaughlin, a good friend of the then Crown Prince Jonathan. Eleven days later, on 25 October, the new Duke of Highland was also made 2nd in Line to the Throne, by Act 105 of the Austenasian Parliament. Like all Acts of Parliament, it had the consent of all Representatives and of the Monarch. This was done as a purely ceremonial honour. It was not expected that Lord Esmond would ascend to the Throne.

On 15 February 2010, Emperor Terry I unexpectedly announced his abdication. Under Austenasian law, an abdicated Monarch legally remains Monarch until a willing successor is found. Crown Prince Jonathan was Heir to the Throne, but he lawfully refused the Throne in order to remain Prime Minister (under the Constitution, the Monarch cannot become Prime Minister and vice versa). The Throne therefore passed to the 2nd in Line, Esmond, made 2nd in line by a lawfully passed Act of Parliament. He ascended the Throne on 16 February, after giving Imperial Consent to Act 113. As well as officially accepting the Throne, this Act kept the Line of Succession the same as it had been for Emperor Terry in order to keep the Monarchy stable. Crown Prince Jonathan was therefore still Heir to the Throne, and Princess Caroline was 2nd in Line.

On 3 March 2010, over two weeks since the ascension of Emperor Esmond III, Princess Caroline announced that she was making a formal claim to the Throne. She did not believe that the Line of Succession should be able to be changed by Parliament, and that as the closest blood relative of Emperor Terry I after his abdication, she should be next in line and therefore rightful Empress.

The Vestry Conference was arranged to try and secure a fair compromise, but ended in disaster with the declaration of the Austenasian Civil War. Lord General William raised rebel forces to fight on behalf of Princess Caroline's claim. After the rebels and their supporters were defeated in two battles against supporters of the Emperor, the Carolinians agreed to the Austenasian Monarchical Referendum, in which it was proved that the Austenasian public supported Emperor Esmond III. Princess Caroline therefore withdrew her claim on 24 May 2010 with the Treaty of Ruskin Road, also ending the civil war.

After Princess Caroline withdrew her claim, Crown Prince Jonathan realised that he had inherited the Carolinian claim to the Throne, as if Princess Caroline had been Monarch then he would have been Heir to the Throne. He renounced this claim the following day, after which it passed to HIH Princess Christine, the eldest sister of the former Emperor Terry, who has never made any comment on this theoretical claim. The last official support for the Carolinian claim ended on 14 November 2011, when the Decracy of Yunivers withdrew their support for the alternate succession.

There has been no foreign political support for the Carolinian claim since 14 November 2011 when the Decracy of Yunivers withdrew their support.