The Vestry Conference was a meeting that took place on 7 March 2010 between Crown Prince Jonathan, Princess Caroline and Lord General William in the Choir Vestry of Carshalton Methodist Church. Discussions about Princess Caroline's claim to the Throne broke down, and ended with the declaration of the Austenasian Civil War. 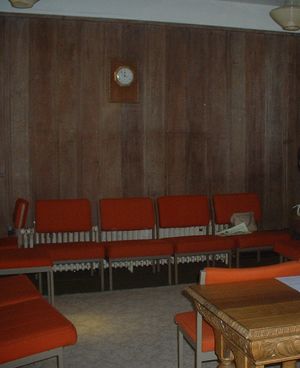 The Choir Vestry of Carshalton Methodist Church, used for the Vestry Conference of March 2010.

After the Terry I abdication crisis, Esmond III had become Monarch. Princess Caroline objected to this, stating that Act 105 was in her eyes unlawful and that Parliament should not be able to change the line to the Throne.

A conference was thus arranged to see if there was any possible compromise before the matter was brought before the Emperor.

At this point, Vicereine Margaret (the mother of Crown Prince Jonathan and Princess Caroline) entered the room and removed the Princess so that she could make her JMA collection (a weekly subscription-based collection for charity that a lot of the church's children did).

Crown Prince Jonathan and Lord General William followed them out of the room into the main church, where they started discussing Esmond III's accession to the Throne. The dictaphone used to record the Conference was still playing, and the following was recorded:

The three went into another room, the Park Annexe, and Crown Prince Jonathan told Princess Caroline to sit down. He then tried to record a confession from her on his phone, but before he could do so, Lord General William told him that if he did not get back his position of Chief Inspector, there could be a civil war.

The Crown Prince enquired as to whether that was a threat, but Princess Caroline escaped into the garden, followed by the other two.

The Austenasian Civil War had begun.