From MicroWiki, the micronational encyclopædia
(Redirected from DRCI)
Jump to navigation Jump to search

Cliff Island, officially The Democratic Republic of Cliff Island (DRCI) Is a country on the coast of North Carolina

The ENC was reorganized into a Democratic Republic called the Democratic Republic of Cliff Island (DRCI). The DRCI was more open in its membership than its predecessor group, as the previous group only allowed those who had been born in NC to join. The DRCI accepted all people who had been born in the US, Increasing its activity and numbers, But the North Carolinians of the group maintain control of the nation Like the President Sir. Jackson Niles Alexander who made the first contact with the Micronational community in late January 2010. 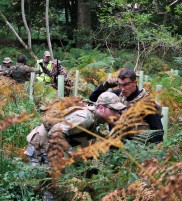 The Clarke Rebellion can also be called the DRCI revolutionary war because of all the things that were changed because of it. It started because of an airsoft game. The heads-of-state were on a training mission when an anonymous friend fired a full clip, point-blank, at President Alexander. The president was furious and ordered him punished by firing squad, but vice president Clarke defended him, even threatening the president with an airsoft pistol. The president sent an Ultimatum, surrender, or be arrested. The rebels responded by separating and creating their own country, the Democratic Republic of the Wilderness. Within an hour of its creation, the army had surrounded the embassy to the US with one intent, decapitate the head of the government and gain control of the country. The leaders tried one last time to negotiate peace, they failed and the war started.

The Battle of the Embassy

The battle embassy was the only battle of the War. It started exactly one hour after the separation on the grounds of the DRCI embassy in the US. It later moved a half-mile to the south where the battle ended. The first shots were fired just south of the embassy in a paintball field, the loyalist moved north to the embassy followed by the rebel. They then moved to the 2nd embassy building about half-mile south through the forest along an old trail. The rebels soon caught up a half-hour later. Then the battle went on for 12 more minutes with the capture of both the president who was in command and the wounding of the same anonymous friend that started the war when it ended with rebel surrender and the arrest of the rebel leaders.

DRCI was completely reorganized governmental after the Clarke Rebellion. The Government was given more Monarchic principles. The National Council, a group of representatives that that work as a senate, was also created to make it more difficult for a dispute to become secession. The Executive guard was also created to protect the President and the rest of the government. The country has also acquired two islands as territories.

The Democratic Republic of Cliff Island was the main creator of the Appalachian Micronational Treaty Organization, a Group of micronations organized into a "NATO-style" group. DRCI was also the first leader-nation and President Alexander was the Secretary-General.

DRCI announced that it was starting an Anti-Fascism-communism movement on June 3rd, 2010 to "keep new micronations from going the way of the Soviet Union and from causing more war than is needed", President Jackson Alexander.

Operation grown-up was the peaceful expansion of DRCI. It resulted in DRCI growing to include the Main territory, 4 Sub-territories, and one Colony.

It also caused a complete redo of the National Council. now the council has 6 seats (one for some territories and two for ED/CRNP and Cliff Island)

The 2nd Cliff Island Civil War started when the government started Operation Alaska, a mission to help secure president Jackson Alexander's claim to the throne of Alaska. It failed. The next day The Vice President attempted to arrest The President on orders from the Queen Caileigh Alexander, The President escaped and the war basically just ended there. After that, The President and the entire government came to the mutual agreement that DRCI was not working and DRCI was considered inactive.

rebellion against emerald isle and reestablishment

During the Emerald Isle Civil War, a small group of rebels from the Merks, the Mercenaries that started the rebellion, reestablished the DRCI and instituted a militaristic government, this was later changed back into the Democratic Republic. the DRCI held out against Emerald Isle and the Empire of Starland for almost a week after the signing of a peace treaty between the Republic of Tarconia (the country formed by the other rebels) and the combined Starland Emerald Isle forces. The DRCI leader Conor O'Leary accepted the treaty on April 9, 2011, unconditionally.

growth and change of government

on April 12, 2011, The Republic of Tarconia gave it's land to DRCI and the Republic of Emerald Isle. this caused the DRCI to grow to the second largest micronation in North Carolina. This growth caused the one and only government official, Conor,to change the government and declared a democratic dictatorship on April 12.

Cliff Island is a Democratic republic. The Cliff Island political system operates under a framework laid out in the 2010 constitutional document known as the 2010 Constitution. Amendments to the constitution generally require a two-thirds majority of the National Council; the articles guaranteeing fundamental rights, the separation of powers, the federal structure, and the rights to resist attempts to overthrow the constitution are valid in perpetuity and cannot be amended. National legislative power is vested in the National Council

The Council is elected through direct elections. The members of the Council represent the governments of Different Districts in the Country. The respective distichal governments have the right to appoint and remove their envoys at any time.

DRCI has a very simple judicial system. The President works as supreme justice and the National Council votes on other justices. The Military Police work as a police force but plans are being made to create the police force.

Main article The military of the DRCI is small but well trained. It was founded in February 2010. There are two branches: the army and the executive guard. the are armed airsoft weapons, Tests are being performed on Rocket Systems.

The army is mostly land-based combat and the executive guard handles political security. Past conflicts include The Clarke Rebellion, The Skirmish between the Knights, and The Battle of the embassy. The Military is currently at peace. 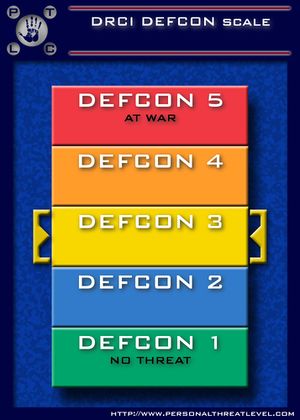 The national flag is green, blue, and yellow. Green symbolizes nature, blue symbolizes bravery and boldness, and yellow symbolizes pureness. The two green strips mean bough banks and the mainland. The blue means the ICW and the star means DRCI.

the coat of arms is divided into four sections: