The 2014 Copan flood was a flood in the Kingdom of Copan which started on 8 January 2014 and ended at some point between 13–19 May later that year. It was caused by heavy rain making an old nearby source of the River Wandle flow for the first time in 15 years, making water flow into the kingdom via a usually dry riverbed.

In 1724, an ornamental landscaping feature known as the Grotto (now in a state of disrepair) was built over one of the two sources of the River Wandle, in what is now Carshalton Park. The river flowed from here through Carshalton Park, underneath Ruskin Road and Carshalton High Street into Westcroft Canal (sometimes known as East Bank), in what is now Copan. It flowed through Westcroft Canal and a watermill (not to be confused with the disused waterwheel in the Grove) before joining the second tributary of the river at Wilderness Island to form the main river. During the second half of the twentieth century, the source at the Grotto dried up and the watermill was demolished. The nearby Carshalton Ponds replaced the Grotto as the main source of the Wandle, with water flowing from the Ponds through the Grove and along the north-west border of Copan to Wilderness Island. Westcroft Canal and the riverbed between the Grotto and Carshalton High Street dried out, although puddles would form during wet winters. Part of the former site of the watermill had houses built on, whereas another part was left as a depression in the ground, around which trees grew, becoming known as the Secluded Place. 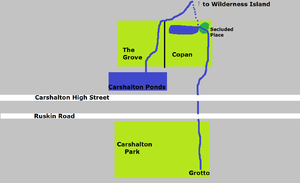 A simple map of the Wandle in Carshalton during the floods, not to scale.

Due to heavy rain over late 2013, in early January 2014 the water table rose to such an extent that the old spring underneath the Grotto began to flow again for the first time in many years. Water flowed down the old riverbed and into Westcroft Canal, overflowing where the canal stopped where the watermill once was into what is now the Secluded Place, flowing down into the Secluded Place and out into the Plain of Copan. Despite some of this water going into a drain, large areas of the Plain of Copan quickly went underwater or became to muddy to walk on.

On 9 January, it was reported that workers from the local British councils were unblocking the pipes running underneath Ruskin Road and Carshalton High Street so that the water could flow uninterrupted from the Grotto into Copan and would not overflow in the United Kingdom. Queen Emma I of Copan stated the following day that despite her dismay at her capital being flooded, the existence of Westcroft Canal had stopped a lot of water from flooding other areas such as the high street.

In early February, Sutton Parks Service set up a barricade around the Secluded Place to warn people of the slippery slopes and gushing water there. More council workers were seen unblocking the pipes again on the morning of 15 February. As noted above, a tarmac footpath connecting two entrances to Copan (named as Papermill Gate and Westcroft Bridge in the Second Edict of Orly) was built by Sutton Parks Service (work starting on or shortly before 23 March and finishing at some point between 21 April and 3 May) as a response to the muddy conditions having made it impossible to walk across the Plain at the height of the flood.