From MicroWiki, the free micronational encyclopædia
(Redirected from New Germany)
Jump to navigation Jump to search

The Democratic Weimar Republic formerly the Democratic New Germany Republic, or DNGR formally the Empire of New Germany was created as a break away from the Kingdom of Wegmat. It used to promote industrialism and being as helpful to other micronations in the region. It later rejoined Wegmat as an autonomous province and operated as mostly independent. Recently however the republic became an empire again, keeping it’s name of the DNGR. This country disbanded to create the Grand Duchy of Weimar.

New Germany or the Empire of New Germany, is west of Chicago in the Chicagoland area; and worked to better it's military power and put its influence over other micronations in the area. It has a large populated area to its north and large farm areas and a war zone to its south. Attempted conflicts in southern New Germany happen very often because of tensions between the two nations of New Germany and Wegmat. Nate M. the Minister of Defense in Wegmat has been very cautious since Bobbygrad left Wegmat. On February 13, one month after the founding of New Germany, the New German Health Agency was created.

Before Vladimir Baruh joined Wegmat in about 2019, he made Bobbyland, named after one of his good friends. He originally made as a joke because he while had to ride to the local community center, little kids would pester him while he took a nap on the bus. At first it was like a dreamland, but as Vladimir Baruh got a bit older he refined it, and it became a very militaristic society who enjoyed trench warfare. When Vladimir Baruh joined became a citizen of Wegmat he left Bobbyland occasionally re visiting it but founded the city of Bobbygrad formally in northern Wegmat. It was the foundation that New Germany needed to create it’s own country and have more jurisdiction over the area.

New Germany’s most profitable companies are arms companies such as Bobby Inc.. Mostly bang guns, swords, and sheids. If other country's don't buy they give them to the military. They are also big in construction. This is possible by Bobby Inc.. Other large companies cover accounting and building they are employed by big companies such as Walsh and Mcqui. That bring in most of the income for New Germany. There is also a army surplus store near Maggiegrad witch brings income as well. This spring the New German agency of agricultural affairs Has decided to try it's hand in growing food. Also several small stores across Bobbygrad exist selling a multitude of things. another buiness is Baktoid workshop another smaller arms manufacturing company.

New Germany has 3 main provinces and 2 administrative Territories, the 3 main provinces are mostly suburban like settings with a few parks here and there. There are two administrative Territories that hopefully will become Provences. The are mostly woods however 1 is also lots of prairie that is known as Hesshnia, and the other is mostly hilly forest which includes an island known as annie island, the territory is known Wüntternia.

There are two major political parties in New Germany, the Royal Party witch everyone in the royal family is a member of but they do not run political races becuse the Kasier is the head of state already, the other is the Founders Party but the head wants to change the name to something else. There are curenty the biggist and only party in the New German Parliament, this being the case there is not much fighting in parliament. However on may 7th the New German Parliament was disestablished

The New German military has two branches, the Heer or army and the Kriegsmarine or navy. The Heer is equipped with a mix of old and new gear and is armed with airsoft guns. The Kriegsmarine has about 5-6 ships which are in the Northern Territorys.

There are paramedics that can respond to small injury's such as scrapes, cuts, burns, bites, etc. But if major injury's occur the US paramedics will come and ether treat them on the spot or bring them to Rush Hospital. The roll of policing comes under the jurisdiction of the Army, however a police force similar to the German Volksstrum.

In the Empire of New Germany most US laws carry over into New Germany with the exception or inclusion of certain laws. There is no official court system in New Germany, however trials may occur for more serious offenses including: Assault, Treason, ect. Where Vladimir Baruh would judge whether or not that person is guilty or not with the aid of evidence and witnesses.

New german citizens are located in Chicago so there are forests around but most citizens stay within Bobbygrad citizens usually stay in the city limits. When the weather is nice it has been know for all the citizens to come out and play.when it's cold usually only soldiers are out. there are also reasteraunts sutch as marys kitchen and maggiegrad ice cream shop. In recent months some individuals would like to forcibly remove the Kaiser from power though Mostly this Jokeing by a notorious protester in New Germany but it has not got violent.

This is the Demographic chart of humans in New Germany because there are some animals counted as citizens.

Most New German citizens eat a variety of food. A staple of New German culture is the famous Baruh sandwich, trail mix, coke cola, and other types of junk food. There are numerous restaurants most notably being Le diner witch serves Bobby sandwichs 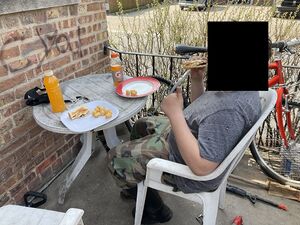