The Battle of Jefferson Lake was a battle of the Midlothian War that occurred on 16 January 2022, shortly preceding the Battle of Bushwood.

Before fighting, all three forces met at around 12:30 PM local time to eat and talk with each other. While Cole Baird was walking away, Jackson I decided to carry out the Kapresh tradition of stealing something minor from the enemy during battles. A New German soldier helped him steal a map of the province of Madison from Baird's bag.

Fighting began around 1:30 PM. Both forces settled down near a hill and began exchanging fire. Eventually, the Kapresh and New German forces charged the Weg position. At 2:15 PM, two Weg soldiers were taken captive by Matthew Hughes, and a few minutes later, New German forces would take one Weg soldier captive. Shortly after this, Matthew Hughes would subdue Cole Baird and lead him to the rest of the captives. By 2:20 PM, the entirety of the Kapresh, New German, and Weg forces were in the same spot. Cole Baird attempted to negotiate with a New German officer, while Matthew Hughes and Jackson I were keeping watch over 2 Weg captives. About 15 minutes later, the battle formally concluded. 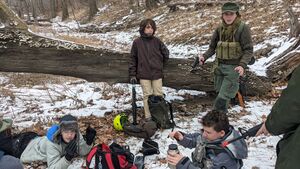 After fighting concluded, all parties agreed to another battle at Bushwood. But, in between these battles, Vladimir Baruh ordered a firing squad against Cole Baird, carried out by New German Paratroopers. About an hour and a half after the Battle of Jefferson Lake concluded, the Battle of Bushwood began.