From MicroWiki, the free micronational encyclopædia
(Redirected from Bobbygrad Airport)
Jump to navigation Jump to search

BIP or Priory Airport was established as Priory Air Base before it was uses to transport cargo across Wegmat. Most operations their are cargo based for Weg Air. It is the Airport serving New Germany and Priory

Originally an extension of "the ally", it was Turned into Bobbygrad airport. After the seceding of Bobbygrad it became the border of Wegmat and the Empire of new Germany, it was one of the main reasons Operation Dummy Thicc was launched. After the first part of Weg war 1 it was given to the Empire of New Germany. However no known aircraft are registered in New Germany.

Weg Air serves the airport both cargo based and smaller passengers such as mice or hamsters. For cargo the most commonly used plane is the LZI 4 Spad S.VII for cargo operations and sometimes passenger. 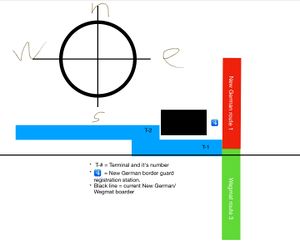 The New German Boarder guard Station 1(NGBGS for short) also know as the registration office is were you go to register you aircraft, paper check and reviewing of cargo is done. The way to register a aircraft is to email newgermanboarderguard@gmail.com, and ask fo an appropriate time and day, who your flying with, and what your packing. On said day 1-3 New German Boarder guards will check you identification papers(must show to fly), check the cargo at least 2 times(standard protocol) to check for illegal objects, and escort you to the correct terminal for departure. After departure you must leave you contact information for landing back again and you must repeat the process backward. If illegal objects are found they must go through new german interrogation to see wear it came from and then prosecuted by New Germany and there home nation.

Terminal 1 or T-1 is used for civilian usage. It is the first terminal when entering, it is used by weg Air and Tomcall airline. It can also be privately owned aircraft as-well.