The Rainbowlands are a series of international territories that were given away by a program of the Des Plaines Union. 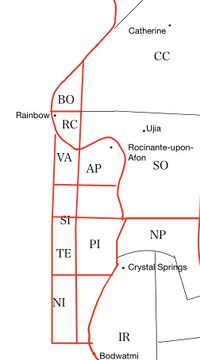 Chaveleir made map of the Des Plaines Valley Sector zoomed in on the Rainbowlands.

South of the Lawrence Line in an area called the Crystallines they are 4 plots.

The Northern Rainbowlands also know as the Afons are the more settled areas.