Alexander I Constantine of Monmark

From MicroWiki, the free micronational encyclopædia
(Redirected from Alexander I Constantine, Emperor of Monmark)
Jump to navigation Jump to search

Alexander I Constantine is an American Micronationalist who is the reigning monarch of the Monmarkian Commonwealth since its predecessor state of the Kingdom of Monmark. He has ruled since 2017 and has been at the forefront of Monmarkian development. Ascending the throne upon the foundation of Monmark on 26 December 2017, he quickly made many laws to guide Monmark through her first months. He is also the reigning monarch of the Arthurian Empire, ruling as its second Emperor. In July 2022, Alexander engineered Monmark's transition to a Commonwealth, establishing Kingdoms as part of the Commonwealth, and voluntarily reducing his title from Emperor to that of King.

Alexander is also a Begonic politician, serving as Lord-High Chancellor at one point. Alexander was also Prime Minister of Wynnland in early 2021. He also served in the Vishwamitran House of Councillors prior to its abolition.

The following is the micronational career of Alexander I Constantine, however as most of it is undocumented, 2017-early 2020 are relatively short.

Alexander I Constantine's micronational career began on 26 December 2017 when he founded the Kingdom of Monmark with his close friend James Thomason, becoming King and appointing James as Prime Minister. Monmark was at the time a largely unprofessional nation with poorly defined land claims, no attempt at a constitution, and largely underdeveloped government, meaning that until late 2019 and early 2020, the nation slowly decayed and went into inactivity. On an undocumented date as early as November 2019 and as late as February 2020, Alexander I Constantine declared himself an emperor, and used the position to begin reforming Monmark and hauling it out of inactivity throughout early 2020, with the notable accomplishments being the writing of the first constitution, first diplomatic outreach, and most importantly, building up a new loyal base of citizens. On 20 June 2020 he became "King of Monmark" once again as the Bluff Province, which was the principal province of the nation at the time, was reformed into the Kingdom of Monmark as the first constituent country of the nation, followed by others on the same day. On 14 August, the first Parliament of Monmark was appointed as a provisional government, and admitted the Kingdom of Paland to the nation the same day with approval of Alexander I Constantine. The next day, the monarch changed his title from "Grand Emperor" to Emperor, to be more modest in his titles, which was the start of a period of rebranding from the old "Grand Imperium" spearheaded by Alexander I Constantine. On 1 November 2020, Alexander I Constantine suspended parliament with its approval, and became absolutist, as he and his advisors recognized that it was an ineffective institution that was starting to lead towards inactivity. In late November and early December, Alexander I Constantine began writing a series of acts and decrees that started to bring up to date the formerly neglected laws of Monmark.

Alexander I Constantine is a heterosexual male.

“Alexander I Constantine” is not the real name of this monarch, merely his regal name. He chose the name in July 2020 to identify himself while staying anonymous.

Alexander I Constantine has a brother and a sister, with his brother being the heir to the Monmarkian throne.

Alexander I Constantine lives in South Texas and was born in Colorado, having lived in Texas since 2016. His home functions as the Royal Palace, and thus the seat of government and the center of the nation culturally and politically.

Alexander I Constantine has been raised a protestant Christian, however he has expressed interest in Catholicism and Eastern Orthodoxy.

By the Grace of God, His Most Christian Majesty, Alexander I Constantine, King and Autocrat of Monmarkians, King, of Bristonians, Lundians and of Saint Nicholas, Protector of the Commonwealth, Defender of the Faith and Sword of Christ.

King of the Highlands

King of the Texans

Duke of the Brooks

Duke of Ganton and of Sonesta

Margrave of the Southern March of Westark

As King of Monmark, he is the fons honorum and Sovereign of the honours of Monmark:

Founder Sovereign and Knight of the Monmarkian Cross (5 September 2020)

All such honours received by King Alexander I Constantine as citizen of other states.

Head Knight Commander of the Order of Augustus (2 February 2021)

This is the order of wear of decorations and honours of David Augustus I, the Emperor of Monmark. 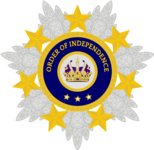 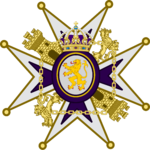 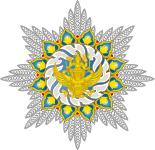 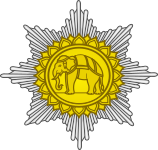 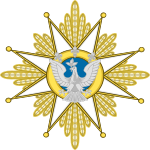 All variations of His Imperial and Royal Majesty’s style as used by him.

His minor style which consists solely of his most important title is as follows.

By the Grace of God, His Imperial and Royal Majesty, David Augustus I, Emperor/High King of All Monmark and all Her Dominions across the Seas, Defender of the Faith, and Sovereign of the Monmarkian Orders of Chivalry.

His medium style which consists of his highest ranked titles is as follows.

The following style is his complete list of titles, although as he gains titles rather frequently, this is never a truly complete list.

By the Grace of God, His Imperial and Royal Majesty, David Augustus I, Emperor/High King of All Monmark and all Her Dominions across the Seas, Texan Emperor, Emperor and Protector of the Monmarkian Commonwealth, Emperor of Calahorra, Defender of the Faith, Protector of Texas and its Faith, Autocrat of the Seas, Protector and Autocrat of all Monmarkians, the Villnai, the Westarkers and Eastarkers, the Highlanders and Lowlanders, the Laurelians, Forestians, the Palandians, Kaltmarkians, and all Neu-Begonish, Lord Protector of Caridia, Chancellor of Begon, King of the Highlands, King of Lofenia, King of Colorado, King of the Texans, King of Antonia, King of Vendersburg, King of Chyia, King of the Anderonians, King of Pan Archduke of Kaiserstadt-Koenigstadt, Grand Duke of Westark, Grand Duke of Wessensburg, Grand Duke of Davidstadt, Prince of Colorado, Prince of Austeria, Prince of Crimson, Prince of Kaltmark, Prince of Adelie, Duke of Santboro, Duke of Stetsen, Duke of the Brooks, Duke of Ylisse, Duke of Siple, Duke of Apensberg, Duke of Sunderidge, Duke of Ganton and of Sonesta, Duke of Aransas, Duke of Carolina, Count of Domark, Count of Altenmark, Count of Grafen, Count of Viletio, Margrave of the Southern March of Westark, Baron of Laurin, Baron of St. Uriel, 1st Baronet Crimson, Knight of the Empire, Seigneur of Hamilton, Lord of Edleboro, Lord of Vensenstadt, Lord of Faltark, Knight of the Order of the Crowned Lion, Knight of the Order of the Cross of Saint Patrick, Recipient of the Order of the Emperor(Arthuria), Sovereign of the Orders of Monmarkian Chivalry, Chancellor of Austeria, MP of Galte, MP of Ozikstan, Representative in the Representatives Lodge of the Maple Republic, Foreign Minister of Begon, President of the Congress of German Speaking Micronations, Supreme Commander of the Armed Forces of Monmark, Chief of Staff of the Imperial Army of Austeria, Generalfeldmarschall of the Austerian Imperial Army.

David Augustus identifies as a Monarchist and Christian Traditionalist. He believes in extensive personal freedom alongside a government inspired by Christian values. He is an avid opponent of Abortion, calling it "a most abhorrent and satanic ritual". He does not support any American political party, deeming partisanism to be "damaging" to the nation.