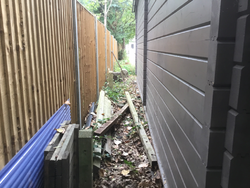 Walkway Alley in northwest Új Repülő was one of three pedestrian alleyways in the erstwhile Principality of New Eiffel and later State of New Eiffel of the Grand Duchy of Australis—alongside South Alley and New Leeds Alley. 0.75 metres (29.5 inches) wide and 17-metres (55.7 feet) in length, Walkway Alley contained 20.9 m² (224 ft) of space, of which 11.2 m² (120 ft) was privately owned. Despite its name, the alleyway was not widely used for walking, rather being used as storage for outdoor tools and construction materials by various individuals throughout its existence. The alleyway came into existence in April 2017, when the walls of New Eiffel School were constructed. It was officially designated as Walkway Alley on 23 December 2019 by the Ministry of Transportation. The alleyway lost its designation after the dissolution of New Eiffel on 1 November 2020, however the alleyway would briefly be re-designated under the Grand Duchy of Australis between 12 January and 9 September 2021. 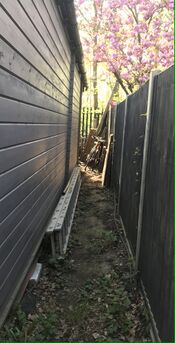 The alley in the State of New Eiffel, Australis, April 2021, looking west towards the New Eiffel-United Kingdom West Border

Walkway Alley was a narrow, 0.75 metres (29.5 inches) wide and 17-metres (55.7 feet) long pedestrian alleyway in northwest Új Repülő, capital of the erstwhile Principality of New Eiffel. Following its course—which ran entirely on a dirt path—the alleyway began at a patio of New Eiffel School and headed westward for 12.1-metres (39.6 ft). Passing the school to its south, and the New Eiffel-United Kingdom North Border to its north, Walkway Alley then turned south. Continuing for another 4.9-metres (16 ft) on private property adjacent to the New Eiffel-United Kingdom West Border—owned by Jimbo's Gym (previously Storage for You!)—it then terminated at the New Eiffel Main Route 1 in ǃkhās Street.

With the construction of the walls of New Eiffel School in April 2017, a narrow alleyway was formed between the structure and the fence of the New Eiffel-United Kingdom North Border. Formerly located in the United Kingdom, Walkway Alley became located within the territory of New Eiffel upon the foundation of Republic of New Finland's British claimant on 4 January 2018, through the Kingdom of New Finland in 4 June and onto the Principality of New Eiffel in 11 August until its dissolution on 1 November 2020, when the territory was seceded back to the United Kingdom. However, Walkway Alley would briefly exist in the State of New Eiffel under the Grand Duchy of Australis between 12 January and 9 September 2021. On 23 December 2019, it was officially designated as Walkway Alley by the Ministry of Transportation. It was designated alongside two other alleyways, the close-by South Alley in Southern Új Repülő, and New Eiffelic Entrance (later New Leeds Alley) in New Leeds.

The alleyway as a pedestrian route was largely unnecessary, being a longer, more treacherous alternative to using the Main Route 1 to get to the Eiffel-United Kingdom West Border. Instead, it was used for storage—generally furniture, construction materials and gardening equipment. Until May 2020, Storage for You!, a now-defunct self storage company, owned the property adjacent to the New Eiffel-United Kingdom West Border, and stored outside equipment there. Some items that could not be in the rain, such as metal tools, were stored in containers underneath the eaves. After Jimbo's Gym—a fitness centre—bought the property in May 2020, Storage for You! moved all of the outside equipment elsewhere. Recreational walking was uncommon, but seen on occasion.

As a filming location

The alleyway also appeared as a filming location in several New Eiffelic films—in Dimensions: Choices (2019), a wendigo chases the protagonist, Stephenson, through the alleyway; in Epic Action Movie (also 2019), the protagonist, who is a spy, tries to escape from the antagonist however gets blocked by the fence of the New Eiffel-United Kingdom West Border; in Star Warz: The Stranded Sith (2020), Pawn Cho, a Jed-Eye knight, meets the bounty hunter Sal Sestis in the alleyway; finally, in India Man! (2020), the alleyway is the entrance to the Evil Indian Boss' secret underground lair.