South Alley in south Új Repülő was one of three pedestrian alleyways in the erstwhile Principality of New Eiffel and later State of New Eiffel of the Grand Duchy of Australis—alongside Walkway Alley and New Leeds Alley. The narrowest alleyway in New Eiffel, it was 3.22-metres (10.5 ft) long and about 42 centimetres (16.5 in) wide. Despite being rendered a pedestrian alleyway, it was seldom used; uncommon for walking—including recreational—and other purposes, such as storage. In existence since at least 2014, it was officially designated as South Alley on 23 December 2019 by the Ministry of Transportation. The alleyway lost its designation after the dissolution of New Eiffel on 1 November 2020, however the alleyway would briefly be re-designated under the Grand Duchy of Australis between 12 January and 9 September 2021. 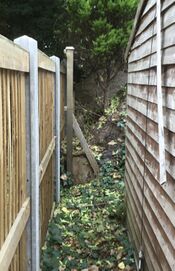 South Alley was a narrow, 42 centimetre (16.5 in) wide and 3.22-metre (10.5 ft) long pedestrian alleyway in south Új Repülő, capital of the erstwhile Principality of New Eiffel. Following its course—which ran entirely on a dirt path—the alleyway began at Unnamed Circle, and headed westward for 2.98-metres (9.7 ft). Passing the New Eiffel-United Kingdom South Border to its south, and a privately-owned shed to its north, South Alley then turned north. Continuing for a final 0.24 metres on private property adjacent to the New Eiffel-United Kingdom West Border, South Alley terminated at the New Eiffel Main Route 1 in ǃkhās Street. The alleyway was heavily overgrown with vegetation due to its seldom usage, and the privately-owned area of the alleyway stored compost.

The alleyway came into existence by at least 2014, when a privately-owned shed was moved onto the area, creating a narrow passage between it and the fence. Formerly located in the United Kingdom, South Alley became located within the territory of New Eiffel upon the foundation of Republic of New Finland's British claimant on 4 January 2018, through the Kingdom of New Finland in 4 June and onto the Principality of New Eiffel in 11 August until its dissolution on 1 November 2020, when the territory was seceded back to the United Kingdom. However, South Alley would briefly exist in the State of New Eiffel under the Grand Duchy of Australis between 12 January and 9 September 2021.

From December 2018 onwards, the alleyway became heavily overgrown with vegetation, as it was almost never used; the alley was also mildly littered over the years. Efforts were made between 19 January and 26 January 2019 to clean up the alley, with the ground cleaned-up and a tree removed in order to create a clearing. On 8 May, the alleyway appeared in the horror comedy thriller film Med-Evil Ghost, from which the eponymous antagonist first appeared. On 23 December, it was officially designated as South Alley by the Ministry of Transportation. It was designated alongside two other alleyways, the nearby Walkway Alley in northwestern Új Repülő, and New Eiffelic Entrance (later New Leeds Alley) in northern New Leeds.