ǃkhās Street (/kǃʰaːs/) was a major street in Új Repülő, capital of the erstwhile Principality of New Eiffel. Part of the New Eiffel Main Route 1, the street began at Triple Junction, the westbound roadway between the Main Route 1's Új Repülő Street to the north, and Dead Tree Lane's Northwest Street to the south. The street led to the New Eiffel-United Kingdom West Border (colloquially the "Back Border").

ǃkhās Street followed a concrete pathway originally intended solely for walking, which had been built between 15 January and 20 March 1946. Designated on 28 December 2019, it was one of the first streets—alongside Seat Street—to be designated as such by the Ministry of Transportation. After Seat Street was re-designated as a public square on 9 February 2020, ǃkhās Street became the oldest street within New Eiffel. The street permanently lost its designation after the dissolution of New Eiffel on 1 November.

ǃkhās Street housed three properties—New Eiffel School, Jimbo's Gym and a privately-owned shed. An open space fronting the New Eiffel-United Kingdom West Border was used for storage space west of Jimbo's Gym, while the space west of the private shed was used to store compost. With these combined factors, ǃkhās Street acquired a reputation of being an industrial street, despite having housed the only licensed educational institute in New Eiffel.

ǃkhās means "flower" in the Khoekhoe language, a language spoken primarily in Namibia and as a minority in South Africa. ǃ is an alveolar click—not an exclamation mark, despite its visual similarity.[1] The name was chosen by Zabëlle Skye from his fondness of African languages, especially Khoisan languages, and particularly those spoken in South Africa.

With a length of 11.8-metres (38.7 ft), ǃkhās Street began at Triple Junction and headed west, where the route experienced a brief elevation. It then passed New Eiffel School and Jimbo's Gym to the north, and intersected Unnamed Circle—a roundabout leading to Dead Tree Lane's Dead Tree Street—to the south, before passing a privately-owned shed also to the south. It ended at the New Eiffel-United Kingdom West Border, colloquially known as the "Back Border." An open space fronting the New Eiffel-United Kingdom West Border was used as storage space for furniture, construction materials, gardening equipment and compost. Both South Alley—to the south—and Walkway Alley—to the north—led to the open area, from Unnamed Circle and a patio at New Eiffel School (fronting the Main Route 1) respectively. 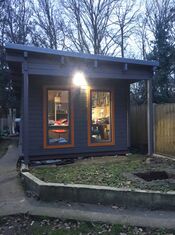 New Eiffel School, with ǃkhās Street to the extreme left

ǃkhās Street followed a concrete pathway originally intended solely for walking, which had been built between 15 January and 20 March 1946. In January 2018, the Republic of New Finland (predecessor to the Principality of New Eiffel) was founded, and the New Eiffel Main Route 1—then unnamed and undesignated—become the de facto highway of the micronation; it encompassed what was to become ǃkhās Street. An image gallery of locations in New Eiffel dated August 2018 shows that the portion of ǃkhās Street between Jimbo's Gym (then Storage for You!) and the privately-owned shed was legally recognised as an alleyway.[2] By August 2019, Unnamed Circle, a roundabout located south of New Eiffel School (and west of Northwest Street in Dead Tree Lane) was unintentionally formed after bicycles repeatedly rode over the area, creating a dirt roundabout pathway.[3]

On 28 December 2019, then-Minister of Transportation officially designated ǃkhās Street and Seat Street as the first two streets within New Eiffel.[4] On 9 February 2020, ǃkhās Street became the oldest street of New Eiffel after Seat Street was re-designated as a public square. On 22 August, Jimbo's Gym opened in the former location of Storage for You!. The street permanently lost its designation upon New Eiffel's dissolution on 1 November 2020.[5] After the territory in which ǃkhās Street is located was incorporated into a state of the Grand Duchy of Australis on 12 January 2021, the street did not re-receive its designation. Since 9 September 2021, ǃkhās Street as been located in the United Kingdom upon the dissolution of Australis and subsequently the state of New Eiffel.