Dead Tree Lane — designated 03f under the New Eiffelic Road Numbering System (NERNS)[1] — was a 6.98-metre (22.9 ft) long bicycle road in southern Új Repülő of the erstwhile Principality of New Eiffel. It comprised two separate roadways, a westbound route, 4.47-metres (14.6 ft) in length, and a northbound route 2.51-metres (8.2 ft) long. The westbound route began an intersection between the J16 to the east, and Prince Zabëlle I Road to the north, and the northbound route split from Dead Tree Lane at a bicycle shed and terminated at Triple Junction between the Main Route 1's ǃkhās Street to the west and its Új Repülő Street to the northeast. Partially paved, Dead Tree Lane required a large amount of maintenance, and was also only road in New Eiffel to hold road signs. Following the dissolution of New Eiffel on 1 November 2020, the roadway permanently lost its designation, and was paved over in late August 2021. Dead Tree Lane comprised two streets, Dead Tree Street and Northwest Street, both of which had been proclaimed on 10 March 2020. 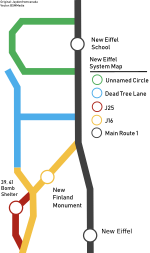 Dead Tree Lane comprised two separate roadways. The first, 4.47-metre (14.6 ft) westbound route comprising Dead Tree Street began at an intersection between the J16's Smith Street to the east, and Prince Zabëlle I Road's Diamond Street of the Esteemed Gems to the north. Running alongside the New Eiffel-United Kingdom South Border to its south, and a playground belonging to New Eiffel School to the north, the route intersected with its other roadway, Northwest Street, once it reached a bicycle shed. Dead Tree Street then terminated at Unnamed Circle—a roundabout leading to ǃkhās Street on the New Eiffel Main Route 1. Meanwhile, Northwest Street ran north for 2.51-metres (8.2 ft) and terminated at Triple Junction between the Main Route 1's ǃkhās Street to the west, and its Új Repülő Street to the northeast.[2] 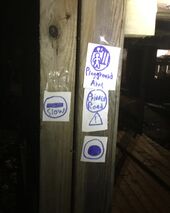 Road signs of the roadway, October 2018. They were removed in September 2020

Dead Tree Lane followed a concrete pathway originally intended solely for walking, which had been built between 15 January and 20 March 1946. By the late 20th century, the path had become covered in dirt and was forgotten. In January 2018, the Republic of New Finland (distant predecessor to the Principality of New Eiffel) was founded. The path was only rediscovered in early 2018, and in April President Zabëlle Skye and younger brother Janus Smith began cleaning the pathway in order to reconstruct it as a New Finlandic road. They had the intent of using it for recreational cycling. After several hours of work, the road was finished, and it was also connected to what was to become Unnamed Circle. They named it Dead Tree Lane, after a tree stump near the road.

On 16 October 2018, Dead Tree Lane became the first road to have road signs, although they would eventually be removed in September 2020. On 20 November 2019, the road underwent extensive maintenance, which included the construction of a small brick siding, and on 24 November a road sign was painted in stone. On 9 February 2020 during Storm Ciara, the road was temporarily closed due to falling debris from a nearby tree. On 10 March, the streets Dead Tree Street and Northwest Street were proclaimed by the Ministry of Transportation.[3] On 1 November, New Eiffel dissolved,[4] and Dead Tree Lane lost its designation. From there onwards, traffic began greatly decreasing as the former citizens no longer found it appealing to use the now generic pathway, opting instead to cycle elsewhere on longer routes within the United Kingdom. When the roadway became located in the Australissian state of New Eiffel on 12 January 2021, Dead Tree Lane did not re-receive its designation. In late August, the road was paved over, and Australis dissolved on 9 September.

Dead Tree Lane comprised two separate roadways—the first, 4.47-metre (14.6 ft) westbound route comprising Dead Tree Street began at an intersection between the J16 to the east, and Prince Zabëlle I Road to the north; the second (Northwest Street), 2.51-metres (8.2 ft) in length, split from Dead Tree Lane at a bicycle shed, and terminated at Triple Junction between the Main Route 1's ǃkhās Street to the west and its Új Repülő Street to the northeast. According to the Ministry of Transportation, Dead Tree Lane. was the fourth (of five) most used road in New Eiffel in 2020, having been cycled on 87 times.[5]