Criticism of the GUM

From MicroWiki, the free micronational encyclopædia
(Redirected from ContraGUMism)
Jump to navigation Jump to search 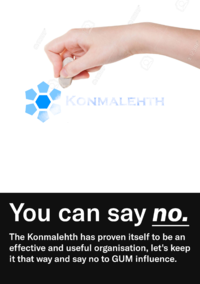 Anti-GUM poster used by Emiel Sebastiaan Hardy's campaign for election as vice-chair in the Konmalehth.

Criticism of the Grand Unified Micronational (GUM) has encompassed numerous arguments regarding various aspects of the organisation, such as policy, ideological bias,[1] administration, purpose,[2] and the ability to enforce rulings.[3][4]

Modern criticism includes claims that the GUM is a YAMO (in spite of its longevity), elitist or useless and does not do much,[2][5] also claiming that it would not benefit their micronation if they joined.[3] Historically, there has also been criticism made over the GUM recognising aspects of micronational warfare, such as the Austenasian Civil War. The GUM was formerly heavily involved in mediation between disputes over Antarctic claims, which was also a point of criticism.

Despite the modern criticisms, the GUM is still widely considered[By whom?] to be the leading forum for intermicronational diplomacy in the MicroWiki community.[6][7][8]

Since the GUM was established in 2009, it has been subject to constant criticism in one way or another. Many terms have been used to describe frequent critics of the GUM, such as 'Anti-GUM',[3] 'GUM-skeptic'[9] or arguably the most widely used term coined by Messenger 'contraGUMism'.[10]

Criticism has come from such people as Gordon Freeman[14] and Heinrich Schneider, mostly about the policies on professionalism held by the GUM. They argued that micronations being constrained or condemned for being non-serious or unprofessional is against their idea of micronationalism being whatever its creators want, pointing to such famous micronations as the Republic of Molossia, one of the most famous and respected micronations in the world,[15] having non-serious characteristics, such as describing themselves as a 'dictatorial banana-republic'[16] and waging war against the defunct state of East Germany since 2 November 1983.[17]

This criticism was refuted by GUM members on multiple occasions, using examples of GUM member states Juclandia counting toys as citizens and Wyvern waging an annual "fireworks war" against the Netherlands - they countered the example of Molossia by pointing out that despite its tongue-in-cheek domestic features it is known for acting very professionally in regards to its interactions with other nations. The GUM attempted to encourage formality in intermicronational relations (something which has been supported by most members of the MicroWiki community several times),[18] and criticised instances when a member state acted in an uncharacteristically informal manner, such as when the then King Håkon of Zealandia announced an alleged "coup" by posting a short video in which he pretended to be a character with a comical voice and fake dreadlocks, and then refused to impart further information on the event.[19] There is no record of the GUM having ever attempted to directly interfere in a nation's domestic affairs, but the organisation did encourage foreign affairs and diplomacy to be conducted in an appropriately formal fashion and expected member states to act relatively professionally on the intermicronational stage.

The GUM was also criticised by members of the MicroWikia community and its then-biggest intermicronational organisation the World Union, for the abusive actions that individual members took against its website and their hostile attitude to the generally younger user base of the wiki, a problem in the GUM which was around for a few years.

On 3 July 2016, Sandus's application to join was rejected by the Quorum, as Sandus was a signatory of the Denton Protocol.[1] Zealandia later announced they would not seek membership, stating: "If this is how they treat a signatory of the Denton Protocol, then I'm deeply concerned about how they may react to a nation whose whole acting collective executive and majority of the population are transgender".[20] Sandus later complained in a statement that Wyvern was accepted despite having a "history of racist and Islamophobic hatred".[21] However a few days later on 18 July, Sandus announced it would no longer adhere to the Denton Protocol.[22]

On 23 May 2019, a micronation called Empire of Lehmark made headlines when it was accepted as an observer state, despite having claimed Earth. The claim was previously not public knowledge. Adam I, Chair of the GUM at the time, said Lehmark would be expelled unless they retracted their claims.[23]

On 3 July 2019, the National Convention of Mahuset approved a proposal by President Emiel Sebastiaan Hardy to formally prevent any current or future Mahusetan administration from applying to the GUM. The main reason for this was due to recent controversial incidents within its membership.[2]

On 29 July 2019, Shiro of Zenrax brought the Great Micronational War to the attention of the GUM (as well as the MicroWiki community) and suggested they try to mediate the conflict. Shiro, admitting his opinion may be biased, sided with Etukan. This was met with heavy criticism, regarding the fact that the so-called "war" was thought by many to not actually be a war, and had elements of mass-pinging and Discord raids, and had other unverified claims. There are claims that Etukan had also supposedly started the conflict. The GUM decided not to take action and stated that the so-called war was "pathetic".[citation needed]

Also in July, the OAM under the leadership of Charles Ross and James Ellis began a campaign to lessen what they perceived to be the GUM's influence over the organisation. During this campaign, both Ross and Ellis (along with other OAM member states) openly criticised the GUM for its bureaucracy and at one point the OAM's government issued a ban on members belonging to both groups (causing an exit of several member states).[24] These attempts to antagonize the GUM mostly failed and upon the OAM's dissolution in August 2019, many of the group's former members joined the GUM.[25]

On 12 January 2020, the Ponderosan legislature voted unanimously to leave[26] after the Chair Thomas Bainbridge suspended Ponderosa Hills's representative Leon Montan after swearing and not using decorum language in the lounge channel. In an earlier press conference, Leon Montan said that Thomas is an "imperialist" and "egomaniac", and that he had banned Leon for "rules that are't applicable",[27] referring to the lobby rules which did not say they apply to the lounge.

On 25 March 2020, Anthony Clark published an opinion article in the Amerston Post arguing that the GUM should allow media access to Quorum.[6]

On 9 April 2020, a safeguarding issue in the GUM erupted into controversy regarding the organisation's response.[28]

On 23 May 2020, during the 2020 New Eiffel general elections, Liberal Egalitarian leader Luke Warren ran a campaign for New Eiffel to leave the GUM due to it " [sic] not being active, been involved with scandals, developed a separate elitist identity, etc." The campaign was not viewed positively and was actively criticised by Labour leader Leon Montan and Independent Party member Jayden Lycon due to Warren imposing a double standard on the GUM compared to other organizations and later Warren apologised.[29] 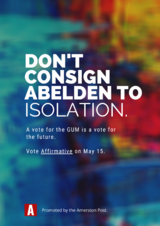 Zabëlle Skye released a comedic song released with a music video about a kid making fun of the Grand Unified Micronational, titled "THE UNITED MICRONATIONS is better",[30] mocking criticism of the GUM and YAMOs, as well as people who take criticism of the GUM too personally. As of 22 October 2020, the video has been viewed more than 170 times. The song later became of the two national anthems of the Cupertino Alliance on 20 March 2020, "having higher precedence", meaning that it gets to be played first.[31][a] This was however repealed after the passing of the Anthem Act in early June 2020.

In a May 2020 editorial for Messenger, former GUM Chairman Henry Clémens presented a lengthy argument where he both defended the GUM and called for changes to be made within the organization. The article also coined the term contraGUMism.[7] The phrase caught popularity among GUM advocates and critics alike.

In August 2020, James Frisch was cited as saying (in regards to Regelis); "[...] it is not a coincidence that you weren't complaining about the GUM and the criticisms are only coming out after rejection. It's a pattern we've all seen before, you suddenly dislike the GUM only now." Saying that some critiques of the GUM (though not all) only begin to criticise the GUM after having their membership applications rejected.[33]

20 alt-accounts[36] by the users OIMGov (Lord Hasan Çakar of Hasanistan) and Mahuset (Emiel Hardy)[37] were banned for vandalism on 26 January 2020. Most of them replaced articles of several micronations with offensive and satirical pro-EU[38] and pro-GUM messages,[39] leading the GUM to intervene (though not directly against the wiki vandalism) later suspending Hasanistan's observership. Despite confessing to the vandalism in private messages and being identified by their IP addresses, the perpetrators publicly maintain their innocence and have attempted to blame Thomas Bainbridge for the vandalism, for which there is no evidence.[40]