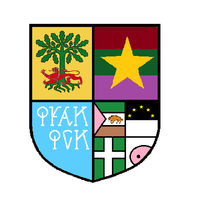 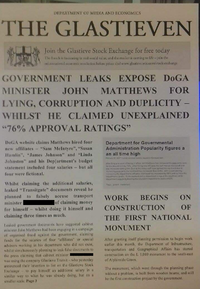 The front cover of the newspaper distributed during Spingate.

The Glastieven had its origins in the Spingate controversy in March 2017, when Blackwood wrote and printed copies of a newspaper with that title in order to reveal Glastieven R's plot to force Glastieven N from the cabinet and to embarrass R by fact-checking claims on his department's website. At this stage, Blackwood regarded the newspaper as an official government publication produced in his capacity as Minister for Media and Economics.

The two operative articles were titled GOVERNMENT MINISTERS SHAMED IN SPIN SCANDAL and KAVANAH ON MATTHEWS - HE LIES TO THE CABINET AND THE PUBLIC (Kavanah was Blackwood's alias and Matthews is Glastieven R). The first explained the events of the controversy but with Blackwood's role changed to hide his involvement in orchestrating it. According to Blackwood, he wanted this first article to nominally criticise all three ministers whilst only really implying that R had actually done anything wrong. The second article was a detailed exposé of various lies that R had told to the cabinet.

May 2017 revival and role in Matthewsgate

Blackwood revived The Glastieven in May, two months after the Spingate controversy, to report on the May 2017 cabinet reshuffle, triggered by the serious April 2017 controversy the week before, and on the Minister for Governmental Administration by-election, triggered by an April vote of no confidence in R that was unrelated to the April 2017 controversy. He created a new website using Wix.com that had a good visual design but was difficult to add content to on the back end. His frustration with the Wix.com site led to him closing the site later in May and holding a consultation at the Sofa Government Club (a social club with the same members as the cabinet) to decide how to proceed. It was agreed that Blackwood should start publishing The Glastieven on a WordPress blog.

During the Matthewsgate controversy, The Glastieven acted as a mouthpiece for the Egalitarian Party National Executive Committee and the Glastieven Secret Service, which were effectively different names for the same entity. On 16 July — after R had insulted N, removed everyone other than his sole ally from the national chatrooms, declared himself president, and then resigned — Glastieven T, the Minister for Media and Technological Affairs and part of the NEC/GSS group, instructed The Glastieven to publish a report "a report showing the extent of our disgust and loathing for the former minister’s behaviour". It is unclear whether The Glastieven was considered a private company or a government publication at this stage.

The Glastieven moved to a more international focus from August to October 2017, positioning itself as a news site for the whole MicroWiki community and changing its tagline to reflect its ambition of achieving a community-wide readership. Blackwood used the website as a mouthpiece, first for his and then for Glastieve's position in the drama over the New Community, a break-away movement from the community led by Blackwood that became confused with a diplomatic dispute between the Empire of Austenasia and the Grand Consulate of Delvera. This included an article that reproduced rumours from an anonymous Austenasian source that a "cold war" in the community was approaching (the source was real but the report gave no reason to believe that) and another boasting that Glastieve's MicroWiki entry was the longest on the site. During this period of drama, Blackwood stated that The Glastieven was a private venture, not an institution of the Glastieven state, and this remained the understanding for the rest of the publication's existence.

The square version of the logo designed in September.

Blackwood closed the WordPress site in September 2017 and moved The Glastieven to a new URL on a classic Google Sites page. He also designed a new coat of arms logo for the publication. The move to Google Sites coincided with a shift in emphasis back towards the publication's role as a national news site for Glastieve, and after T's Internal Affairs Motion withdrew Glastieve from the micronational community in October, The Glastieven stopped reporting on international issues altogether.

After Project Zeta in November 2017, an attempt to downsize the government and increase the focus on non-governmental activity as part of the micronation project, Blackwood planned to resign from the cabinet and work full-time as an independent journalist by reviving The Glastieven as a print newspaper. He did resign from the government with this intention a few days before the Reform controversy, but the First Republic collapsed before he had the chance to write the first edition.

The Custodian and the Acteriendia Evening Standard