From MicroWiki, the free micronational encyclopædia
(Redirected from De-Farhanization)
Jump to navigation Jump to search 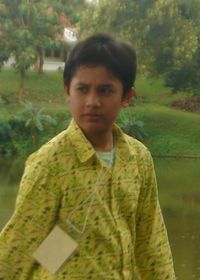 The policy was the results of conflicts between Farhan and prime minister Nabil Ihsan after his end of presidential term in September 2011, that became worse after several misunderstanding. Nabil accuses Farhan of insulting Indokistan and micronationalism, which was ended on the ratification of the policy.

The policy turns out to be a great blunder inside Indokistani government, and its intended goal was instead backfires against the government. Condemnation was broad inside Indokistan, even from Los Bay Petros. After just one day, president Dicky L. K. pressured Nabil to end the policy, which was immediately declares its cancellation.

Farhan Abdurrahman, recognised as one of the founders of Indokistan, has been respected and admired greatly by Indokistani population. He was viewed as the "perfect president" that always done the best for Indokistan. His influence over Indokistani public before his end of term was high. In March 2011, his name was dedicated as the name for Indokistani first parliament, Farhangrad Parliament, and the name of the central government building, Farhangrad building.

After his end of presidential term in September 2011, Farhan Abdurrahman was appointed as Presidential Adviser, after calls to make him remain inside his successor Dicky L. K. government. Farhan began to criticise Indokistani government in October 2011, which was seem as strange by many citizens, with observers commented that Farhan's position has been in total opposite as what he believes as president in the last month. He later declared his resignation from all Indokistani political positions he hold, and immediate retirement from micronational politics. Yet after his resignation, he was still criticising Indokistani government, even comparing it to North Korea.

Seeing it as a great humiliation against Indokistani government, prime minister Nabil Ihsan, in fury, proposed a punishment against Farhan, which will includes removal of all references of him inside Indokistan. After asking for approval from Dicky, Nabil confidently signed government decree establishing policy of De-Farhanisation in 16 October 2011.

The decree describes that the policy targeting all symbols and things related to (or named after) Farhan Abdurrahman, yet doesn't describes any specific orders of removal inside it. Until the end of the policy on the very next day, only the removal of Farhan names and revocation of his awards was executed.

The decree also ruled should Farhan agreed to stop his actions to "harassing Indokistan and micronationalism", parliament would reconsider the policy, with possible cancellation. It also threatens Farhan should he refuse to abide, the policy would be continued with no possibility of cancellation.

On the first day of its implementation, Farhangrad Parliament was disbanded solely because it was named "Farhangrad", and Indokistani government official website domain, wix.com/indokistan/farhangrad, was immediately shut off because of the same reason. The authority also agreed to immediately remove the name "Farhangrad" from the central government building, with the self-descriptive name "Gedung Pusat Pemerintahan" (Central Government Building) was used as temporary placeholder.

Shortly after that, new name "Bolshoiskii" was emerged and immediately approved to replace "Farhangrad" name, thus the building was renamed as Bolshoiskii Building, and a new parliament, Bolshoiskii Parliament was formed with entirely new members. Government website was only replaced in January 2012, long after the end of the policy.

Before the adoption of the policy, Farhan already received two awards for his contribution and loyalty to Indokistan, which was the Order of the Golden Duck and the Ribbon of Courage. Because of de-Farhanisation policy, both awards was revoked.

Los Bay Petrosian president Adriansyah Yassin Sulaeman later echoes his citizens heavy criticism against the policy, with him personally concerned. This was later criticised by Nabil Ihsan, which later made a caricature published in pamphlets that condemned Los Bay Petros of interfering Indokistan internal affairs.

Realising the policy was a disaster, president Dicky L. K. was pressured to cancel the policy and to take a "disciplinary action" against his prime minster Nabil Ihsan. After personal talks with condemned Farhan, he forced Nabil to cancel the policy in 17 October. Beside on that, Dicky also ordered a peace settlement between Farhan and Indokistani government and agreed on demand to apologise, yet refused to restore replaced names and orders. Understanding the extent of personal relationship damage because of the policy, Nabil finally agreed to declared cancellation of the policy.

As ordered by the annulling decree, beside on the cancellation of the policy, Indokistani government also issued an official apology to Farhan on MicroWiki in the end of October 2011. A settlement was also agreed between Farhan and Indokistani government. Yet, replaced names and orders were not restored, so Bolshoiskii name was continued to be used, in opposite of Farhan's demand.

After the settlement, relations between Indokistani authority, particularly Nabil Ihsan and Farhan Abdurrahman were improving, with both sides admit mistakes and forgiving each other. Farhan later decides to break his retirement and rejoin Indokistan in early 2012, and was warmly welcomed by Indokistani government. He was later delegated as Ambassador for Los Bay Petros, specifically appointed in order to observe ongoing conflicts there. Farhan then consistently contributes to Indokistan until 2016, virtually forgetting that the country he contributes to once attempted to disgraced him.

Up until Indokistani dissolution in July 2016, discourses about this policy was highly discouraged, with Indokistani government sees this as a disgrace that doesn't need to be remembered. Indokistani public was slightly provoked when Theodorus Diaz Praditya of Excellent congratulates Farhan on his victory in 2014 election, by saying that "the purged leader has return".