Amon Lasgalen is a devolved county of the Kingdom of Sorrenia, and was previously a kingdom, led by His Majesty Llewelyn Lawton.

The flag is a horizontal bicolour of green and white with a Sindarin symbol emblazoned over each. The colours represent the area's luscious greenery and nature, while the Sindarin symbol represents the county's cultural roots.

The current flag is a return to the original. Upon Amon Lasgalen's independence (and ultimate cessation into the Abeldane Empire), the flag was changed to a white cross outlined in gold against a black field, which was a combination of Saint Piran's Cross and Saint David's Cross. 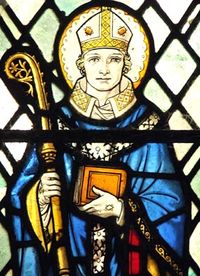 Amon Lasgalen is a heavily agricultural area, and so has been used for millennia. Settlements existed in the area since the Kingdom of Jórvík, with Richmond - the town upon which Amon Lasgalen is centred - emerging shortly after the invasion of William the Conqueror.

Richmond quickly grew into an important trading hub and wool manufacturer. In 1877, A permanent military presence was established in the town with the completion of Richmond Barracks.

The area has in recent years become a popular tourist suite, given its tranquillity, historic architecture and geography, perfect for hiking and relaxation.

Amon Lasgalen traces its lineage to the rebel nation of Aztoka, which was formed in rebellion against the communist Kozlova by Llewelyn Lawton. Aztoka was largely non-serious, however, some elements of the modern Amon Lasgalen culture can be traced back to here - the greater focus on religion in politics can be seen in Aztoka, and a certain rebellious streak against both socialism and other local micronations continued into Amon Lasgalen and the modern-day.

Upon Lawton's involvement in Sorrenia, Aztoka transformed into the Democratic Kingdom of Amon Lasgalen. Llewelyn becomes its king, however, democratic elements were heavily intertwined into the micronation's government.

The area was also strongly in favour of the Sorrenian Commonwealth Party, and so became a hotbed of anti-socialist support as well as support for the maintenance (and possible extension) of the monarchy in Sorrenia.

Shortly before the collapse of the Sorrenian Federation, Amon Lasgalen broke off and was independent for a short time, although it too fell into inactivity.

The flag adopted by the Kingdom of Morgannwg

Given this inactivity, the leaders of the micronation chose to join the Abeldane Empire. While doing so, the imagery and name were significantly changed, further associating the micronation with Welsh culture while distancing it from its Sorrenian past.

This status quo existed for almost two years, however, upon the outbreak of conflict in Sorrenia, the Kingdom expressed concern. When monarchist forces took Levaria and rooted out the Socialist League, Morgannwg declared an end to the conflict. This was short-lived, however; Sorrenia's invasion of Dradelia prompted Morgannwgywn action, who invaded southern Sorrenia. They were ultimately defeated and reabsorbed into the new Kingdom of Sorrenia.

Amon Lasgalen is the most politically plural state in Sorrenia, with the vote usually splitting rather evenly between the parties that run. Historically, Amon Lasgalen developed a more centre-right tradition, intent on upholding the Amon Lasgalen Monarchy as part of the Sorrenian Federation.

Once the Kingdom of Morgannwg was defeated and Amon Lasgalen forcefully re-integrated into Sorrenia, His Majesty King Ronald I appropriated the Lasgalen monarchy for himself. This, in turn, alienated many locals from the New Monarchists, while the Old Monarchists and Libertarians both promised to request that the King re-establish a devolved monarchy in Amon Lasgalen. This is largely seen to have propelled the two parties to electoral success.

Meanwhile, some Amon Lasgalens were dissatisfied with a devolved monarchy and began calls for full secession, forming the Lasgalen Revolutionary Front, named after the Dradelian Revolutionary Front. Unlike its Dradelian counterpart, however, the LRF does not call for violence. It is also more inclusive of political beliefs unlike the DRF (who are distinctly left-wing and republican).

The Republicans run in Amon Lasgalen but receive almost no support.

To the west, Amon Lasgalen is surrounded by the Yorkshire Dales, a large hill region made up of moorland, several lakes and spruce forests.

Itself, Amon Lasgalen is similarly hilly. The River Swale runs through the centre of the state and its largest town, Richmond. Other than Richmond, a number of small hamlets and villages are spread throughout the state.

Richmond, a historical market town is situated in the very centre of the state