The Sorrenian Rosmerta, also commonly known as the Rosmerta or Ros is the official currency of the Kingdom of Sorrenia.

Originally called the Sorrenian Dollar, the name was done away with due to its generic nature. In order to celebrate Sorrenia's celtic ancestry, the currency was named 'Rosmerta' after the Gallo-Roman god of the same name. The renaming was fitting, given her status as a goddess of abundance.

Although the Kingdom of Sorrenia has distanced itself from Celtic imagery in favour of a restored Northumbrian ethnicity, the name of the currency has been retained. 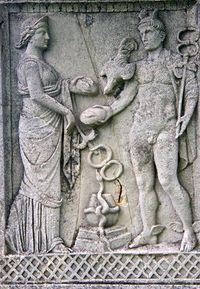 The goddess Rosmerta (left) alongside the Roman god Mercury (right)

The Rosmerta remains almost entirely ceremonial. Because it is not accepted as legal tender in much of Sorrenia, it cannot be used reliably; therefore, other than small transactions for produce between active Sorrenians, the Rosmerta acts more as an element of Sorrenian culture and identity, rather than an operational currency.