Bernicia is a county located in the Durham area of the Kingdom of Sorrenia.

The state is named after the northern division of the Kingdom of Northumbria, given the state was previously the northernmost county of the Kingdom. The naming also marks one of the new monarchy's attempts to celebrate local culture to a greater degree than the Federation did. Although Bernicia is now part of central Sorrenia, its name has not changed.

The flag is a large black bear emblazoned on a white background with a strip of blue to the left. The blue represents the River Wear, which runs throughout the state. Other than this, the imagery displayed lacks specific symbolism. 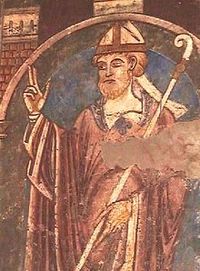 A mural of Saint Cuthbert found in Durham Cathedral

The area of Bernicia has had a complicated history and has long been inhabited. The first documented example of a settlement is the roman fort of Concangis, situated on the Roman roads leading to the very perimeter of the Empire. To this day, one can still excavate roman artifacts such as amphora.

Despite Rome abandoning Britain, Chester-le-Street developed as a moderately sized town. Its early importance is evidenced by the body of Cuthbert originally residing in the town, around which a religious cult emerged. However it did not reach its current size and prominence until the Industrial Revolution. The coal industry left a huge mark on the town, as did the toffee factory. Despite de-industrialisation, Chester-le-Street retained importance due to its status as a market town.

The area was first introduced into micronationalism during the formation of Kozlova. As several Kozlovans lived in the area, it became an important state named Lartania.

Upon the collapse of Kozlova and the emergence of the Sorrenian Federation, the state was renamed to Eurania and a new flag was introduced. Much of the state's importance came from the president's residency in the state, however in 2013 this changed, and Eurania's importance diminished rather significantly.

The current flag used by Bernicia was first introduced during the Federation during the last several months of its existence.

Upon the Socialist League's declaration, Eurania became an important strategic point, given a collection of weapons stored in the area. While socialist forces focused on the south and the city of Durham, monarchists were able to take over the area. Despite some opposition, in turn transporting the armaments to the front line in Durham, allowing them to win several decisive victories.

Upon King Ronald's ascension, the state was renamed to Bernicia to celebrate local culture and history, while the old flag remained. The area predominantly supports both the New and Old Monarchists, although a significant strain of Republican support is found.

Bernicia is a competitive county. Although it has twice returned monarchist candidates, the Republicans also receive a significant proportion of the vote in two of the three constituencies.

Sacriston is uniquely supportive of the New Monarchists, and emerged during the War of the Sorrenian Succession as a foremost point of support for King Ronald. This remains the case, with his popularity bolstered by the presence of his Royal palace.

Chester-le Street is the largest settlement and is located in the centre of the county. To the north, one finds Birtley, the last settlement before Gateshead and Newcastle. To the west, one finds the city of Sacriston, in which the Royal Palace is located.

Inbetween Chester-le Street and Sacriston, a large moorland encompasses the area, which is popular among hikers and dog walkers. This area is also known to be home to wild snakes such as the Adder.

To the north-west, one will find countryside, with several small hamlets and pit villages interspersed within the landscape. Bernicia is widely accessible. Most notably, it connects to the M1 Motorway, and also has two large roads linking it to Durham to the South and Birtley (and ultimately Newcastle) to the north.

Bernicia's economy is diverse, and largely consistent with the economic makeup of nearby counties.

The presence of the Royal Palace in Sacriston has also brought some economic growth to the town. 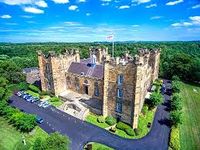 Lumley Castle, located on a hill just east of Chester-le-Street

• Kingdom of Doppeland - originally a single room, the Kingdom was founded by the younger brother of the ex-president of Sorrenia, and eventually encompassed an entire house, forming a distinct history of its own
• Beamish Museum - Beamish is an open-air museum, recreating a northern town during the Industrial Revolution
• Riverside Park - a large park, which houses a play area for children, a bowling green, wide natural habitats and a large population of ducks, geese, swans and other wildlife
• Emirates Riverside - The cricket ground of Durham County Cricket Club, a leading English team. The site also offers football grounds and a large gymnasium
• Chester High Street - Outside of Durham, Chester-le-Street houses the largest high-street,with a wide array of shops, churches and other amenities
• St Mary and St Cuthbert Church - an Anglican early-medieval church, which housed the remains of Cuthbert - Sorrenia's patron saint - for several years
• Lumley Castle - a 14th century castle now owned by the Earl of Scarbrough and used as a luxury hotel
• The Church Mouse Inn - A popular bar and hotel located to the south of Bernicia