The War of the Sorrenian Succession was a series of conflicts that transformed Sorrenia from the defunct State of Sorrenia into a unitary monarchy, under the rule of King Ronald I. 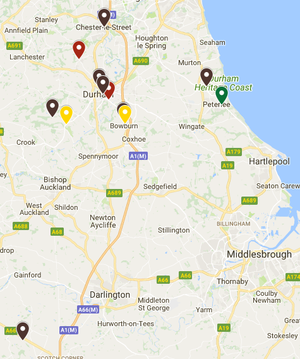 A map showing the various battles that occurred

As interest in Sorrenia waned, the government's duties steadily diminished, and activity in the National Assembly ground to a halt. After several weeks of discussion, an attempted coup and a new constitution, the old government of Sorrenia officially declared an end to the Sorrenian project.

Elizabeth Lewis, who had previously attempted a coup used the opportunity to seize control. She had President Robert of Sorrenia name her Prime Minister and then resign. Upon this resignation, she seized control, declared the National Assembly to be dissolved and ruled by decree. Elizabeth herself ruled in absentia from her hometown in Eresamia.

The State produced a new constitution but garnered little support from Sorrenian citizens. As a result, it too waned in importance.

Over time, the State of Sorrenia lost several key battles, removing them almost completely off mainland Sorrenia. This increasingly allowed the League to assume control over more and more of Sorrenia. In response to this, a man named Ronald (later becoming King Ronald) organised those areas of Sorrenia opposed to a return to socialism. The various right-wing localities, combined with the remnants of the Monarchist Party created the Royal Army of Sorrenia and sought to take control over West and North Sorrenia, as the League took all of East and South Sorrenia.

Conflict centered around the city of Durham, with fighting spilling over into both Bowburn and Bernicia. Initial fighting in February and early March largely saw the monarchists succeeding in large battles, while the Socialist League effectively countered using guerrilla warfare.

Eventually, the monarchists secured Bernicia, and used the armaments stored there to re-equip the Royal Army. By mid March, they stormed several League strongholds, ending the Siege on Durham, and immediately launched a counter-offensive, taking the Socialist capital of New Havana in Bowburn.

Upon this, the Socialist League largely splinted and routed, with several of the leadership being arrested. Talks began with those remaining, and culminated in the formation of the Kingdom of Sorrenia on March the 31st in Sacriston.

Organised resistance to the monarchists remained only in areas of Southern Dradelia (especially Horden).

The League's maintained support in South Dradelia angered both the Kingdom of Sorrenia and the now independent Province of Dradelia which broke away peacefully during the collapse of the Sorrenian Federation.

On April Fool's Day 2018, the Dradelian Army stormed Horden. Casualties were low (sources reported a failed attack with a rocket), however the Kingdom of Sorrenia used it to justify an invasion of Dradelia, citing the defence of Sorrenian citizens and a restatement of Sorrenia's historic right to Dradelia.

Upon the Sorrenian invasion, Dradelian forces were immediately withdrawn from Horden, but were attacked upon their leaving. Once the army reached the battlefield in Easington, they were already tired and wet, due to the poor weather conditions. As a result, the Sorrenian Royal Army defeated them with ease, and proclaimed sovereignty over all of Dradelia.

Response from the Kingdom of Morgannwg

As Sorrenia erupted into war, the Kingdom of Morgannwg (located to the south of Sorrenia) - which had broken away prior to the collapse of Sorrenia - mobilised their Royal Army. King Llewelyn gave a rousing speech, saying "No Sorrenian shall take even one square foot of our glorious realm!". Reports additionally show that the Kingdom may have sent funds to support the State of Sorrenia against the Socialist League.

Upon the success of the monarchist faction, Morgannwg declared a peaceful end to the war, and stated interest in peaceful diplomacy with the new Kingdom. However, upon the invasion of Dradelia, the mobilised Morgannwgydd Royal Army entered the South, seizing almost all of Bowburn and Ertawa.

They retained control over South Sorrenia, and stated that the Kingdom must relinquish all claims to Dradelia. By the third of April, Sorrenian forces were trickling in, returning from the Dradelian Front. King Ronald personally led an attack on Morgannwgydd forces in Ertawa, steadily pushing them back. By the end of the day, Sorrenian troops had control of Eryn Galen. By the fourth of April, the Morgannwgydd Royal Army abandoned Bowburn and returned to their Kingdom, but were decisively defeated.

After this, King Ronald declared a complete victory, and restored Sorrenia's claim to the Kingdom of Morgannwg (renamed Amon Lasgalen).