The Sorrenian people are the predominant ethnic group in the Kingdom of Sorrenia, where they are almost exclusively found.

Up until the Industrial Revolution, almost all immigration was from Caucasian countries. Within this population however, there is significant ethnic difference. Many Sorrenians trace their descent primarily to Celtic populations (mostly Ireland and Scotland), while others are predominantly Anglo-Saxon/English. Many families also have Scandinavian blood in them. 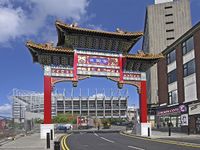 Newcastle's Chinatown is located next to St James' Park

Asian Sorrenians are the second largest sub-division of the Sorrenian people. Most Asian Sorrenians trace their lineage back to the Subcontinent, especially India, Pakistan and Bangladesh due to the significant immigration from these areas of the British Empire.

Asian Sorrenians are most common in the cities of Bradford (where they are 27% of the population), Leeds and Newcastle.

Black immigration to Sorrenia has consistently been small. After World War Two, some immigration from the Caribbean was seen, as well as previously British countries in Africa such as Nigeria. About 1% of Sorrenians are black.

Some mixed ethnic groups exist in Sorrenia, largely as a result of the assimilation of ethnic communities in Northern England. Only around 1% of Sorrenians identify as mixed race.

Prior to the Roman conquest of Britain, Celtic Britons sparsely populated what would become Sorrenia. Evidence of pre-Roman settlements around the likes of Durham and Easington exists, and Britons are known to have been dominant up until modern day Glasgow and Edinburgh in Scotland.

Between 43 AD - 410 AD, Sorrenia acted as the northernmost frontier of the Roman Empire, and one of its most rugged territories.

in the 2nd Century, Hadrian built Hadrian's Wall, demarcating the Roman-Pict border. As one of Rome's border territories, Hadrian's Wall brought in Romans from throughout the entire Empire.

Later, the Antonine Wall was built around 120 km North of Hadrian's Wall. It however was quickly abandoned. 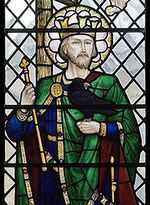 King Oswald was venerated as a saint quickly after his death

In 383 AD, Magnus Maximus withdrew Roman troops from Northern Britain. It is believed that this was intended to be temporary, and for several decades after Roman withdrawal, Hadrian's Wall remained manned by local forces.

By 654, the two local kingdoms of Bernicia and Deira merged into the Kingdom of Northumbria. The Kingdom was ethnically diverse - predominantly Anglo-Saxon, the Kingdom developed its own unique culture, distinct from the rest of the Heptarchy.

The Kingdom became one of the most powerful in the British Isles, and regularly dominated the Kingdom of Mercia to the south. 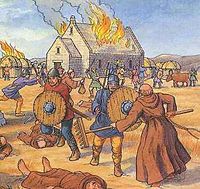 The Raid on Lindisfarne began the Viking Age, which shook the entirety of Northern Europe

The Viking Age began in 793 AD with the raid on Lindisfarne. For several hundred years, the Vikings spread throughout Northern Europe and the Rus in the form of raiders and traders.

After successive conversions and the eventual creation of the Kingdom of England, the Norse permanently settled in Northern England, contributing further to its unique ethnic makeup.

By 954, Northumbria was permanently absorbed into the English Kingdom by Eadred of Wessex. However, Anglo-Saxon culture remained, and after William the Conqueror defeated Harold Godwinson, the North rose up in rebellion. Subsequently, William launched the Harrying of the North, killing a substantial proportion of the North's population.

After several hundred years, the North was entirely integrated into the English Kingdom, although it retained a noticeably different culture, due to centuries of ethnic mixing.

As Protestantism spread in England under Henry VIII and subsequent monarchs, the North largely retained Catholic practices. Under the rule of Elizabeth I, several Northern nobles sought to install the Catholic Mary Queen of Scots in the Rising of the North.

During the English Civil War, the North remained loyal to King Charles.

John Snow was born in York and worked in Newcastle, and largely founded Epidemiology

Northern England's contribution to the Industrial Revolution was monumental. Rail was first developed in Darlington (Teesside), and the world's oldest operational railway is found in Leeds (Hortania).

Many other inventions fundamental to the Industrial Revolution were created in the North. The geordie lamp, hydraulic crane, light bulb, steam turbine and hydroelectric power all came from the North-east, among many others.

The Newcastle Steelworks produced much of the Empire's steel

As the need for coal increased, the Great Northern Coalfield was used to power the many growing industries in the region. This resulted in a growth in the population, as many 'pit villages' and 'collieries' sprang up. This subsequently led to increased immigration from Ireland and Scotland.

Middlesbrough still retains much of this industry. The Teesport is the third largest in the United Kingdom, and the town also produces products related to steel and chemical industries. This is so fundamental to the town that fans of Middlesbrough F.C. are often called 'Smoggies'.

In the latter half of the 20th century, Northern England's industry began to wane as it was out-competed by emerging markets in places such as China. This presented a significant problem, as a huge proportion of the North's population were employed in the industrial sector.

Margaret Thatcher's death in 2013 was widely celebrated in the North

Tensions over the issue reached a peak in 1984 with the UK miners' strike, in which Arthur Scargill and the National Union of Mineworkers directly opposed Prime Minister Margaret Thatcher. The tension, economic turmoil and violence caused remains one of Thatcher's most controversial acts, and she remains viscerally hated throughout Northern England.

Newcastle's Quayside is now known for its entertainment and music sector

Since de-industrialisation however, Northern England has bounced back. Newcastle for example has developed a bustling entertainment sector, and is now ranked as the third best nightclubbing city in Europe. Gateshead hosts the Sage, a large musical theatre, bolstering the area's musical history. Nearby, the creation of the Metrocentre has made Northern England an attractive spot for tourism and shopping. Northern England now also hosts many service sector companies involved in retail and logistics. Many cities throughout the entirety of Sorrenia also host world-leading universities and research facilities.

The Federation identified itself as the 7th Celtic nation

The Sorrenian Federation initially focused on politics far more than culture. In its latter years however, great emphasis was placed on the area's historic Celtic identity, with Sorrenia seeking to align itself with the Celtic nations.

During this period, the Sorrenian language was developed, and the nation moved away from its historic left-wing culture, instead embracing an idealised Celtic ethnicity.

Upon the ascension of King Ronald, the Sorrenian culture sought to place greater emphasis on the local area's historic culture. The Great Expansion in June 2018 led Sorrenia to claim all of Northern England. During this period, emphasis was placed on local traditions such as the local cuisine, the story of the Lambton Worm, a pride in the industrial history of the region, appreciation of Northumbrian-era music and artwork and so on.

Many Sorrenians identify closely with the Kingdom of Northumbria

Further to this, King Ronald officially broke away from the norm of secularism in Sorrenia, reconnecting with the Holy See and identifying Sorrenia as a Catholic nation.

The Sorrenian people are now very closely aligned with the renewed identity of Northern England. The Sorrenian government seeks to attain independence or devolution for the North, and encourages pride in local history and tradition.

Upon the Christianisation of Northumbria by the likes of Paulinus of York, the Kingdom of Northumbria became an extremely devout nation. Despite some initial tension between the early Celtic Christians and Catholics, Northumbria developed a proud history of piety.

Sites such as Lindisfarne became hubs of spiritual learning; after various Viking raids, the monks of the realm moved to Durham; after the Norman invasion of England, a grand cathedral was built in Durham on St Cuthbert's shrine. St Bede was also buried in the Cathedral.

With the Prince Bishops of Durham and the Archbishop of York, Northern England became one of the most important religious areas in Northern Europe.

Upon the English Reformation and the Dissolution of the Monasteries, many Catholics rose up in the Pilgrimage of Grace. Despite their defeat, Northern England retained a rebellious streak. In contrast to the Anglicanism to the South, Northern England largely retained Catholic practices. Eventually, Nondenominational Christianity spread. To this day, Sorrenia remains religiously distinct in comparison to Southern England, with a higher percentage of Catholics and Nondenominationalists.

English is by far the most widely spoken language among Sorrenians, spoken by effectively 100% of the population. Immigrant languages such as Hindi and Urdu are common in areas such as Newcastle and Leeds.

For official purposes, Sorrenian Brittonic is also used. It is based upon the extinct language of Common Brittonic, believed to have been spoken in the area prior to Roman conquest. The language is only used for ceremonial purposes, and is not a commonly spoken language.

Haggis is popular both in its traditional and fried forms

Sorrenian cuisine predominantly incorporates strong elements of both English and Scottish cuisine. The sizeable Asian populations in Sorrenia have also had a significant impact in relation to food.

Popular Scottish-influenced dishes include; Haggis, Mince and tatties and Shortbread. 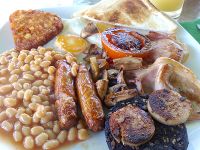 The Full English is a popular pub and hangover-cure dish

Asian immigrant populations brought a wholly distinct cuisine with them, which has now morphed into English-Asian cuisine. Curries such as Chicken tikka masala and Madras are extremely popular in Sorrenia. East Asian cuisine is also popular, with most cities possessing a 'Chinatown', while Japanese cuisine is similarly popular in large urban settlements.

Several dishes are also native to Sorrenia. The Yorkshire pudding is a fundamental element of the Sunday Lunch; the Lancashire Hotpot is similarly popular in much of England.

The Parmo is popular in many fast-food joints in Northern England, and thanks to the extensive shoreline and abundant fish populations, the traditional Fish and chips is closely associated with Northern England.

Sorrenia's recurrent immigration throughout its history has resulted in a very multicultural area. While most immigrant populations fully integrated into the native population, several small communities of distinct ethnic peoples still exist.

Often incorrectly termed 'Gypsies', Irish Travellers remain present in Sorrenia. Irish travellers are nomadic, and move throughout Sorrenia, often also crossing into and out of Southern England and the Midlands, Northern Ireland and Scotland. In early June, up to 10,000 Travellers meet in the town of Appleby-in-Westmorland in Cumbria for the Appleby Horse Fair.

Gateshead is home to many Haredi Jews

A strong Jewish community can be found in Gateshead in the county of Newcastle. Often referred to as 'Little Jerusalem', the Bensham district of Gateshead houses several hundred Jewish families, predominantly of Ashkenazi descent.

In the border counties of Northumberland and Cumbria, immigration from Scotland is common. Many immigrants retain their heritage, identifying not as English, British or Sorrenian, but rather Scottish.