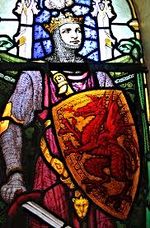 King Llewellyn the Great is a prominent figure in the church

Although Amon Lasgalen was strongly religious under the Sorrenian Federation, all official religions were banned, and so Amon Lasgalens worshipped as private citizens.

With reforms introduced by the Sorrenian Workers Party, several cities of Amon Lasgalen adopted Anglicanism as their official religion, although the Kingdom writ large remained unable to officially endorse any church.

Upon the declaration of independence, Amon Lasgalen (renamed the Kingdom of Morgannwg) officially adopted Anglicanism and joined the Abeldane Empire. Although now officially Christian, the Kingdom did not establish its own church, although certain beliefs and practices established during this period became the precursor to the modern church.

Upon Morgannwg's defeat at the hands of the new Kingdom of Sorrenia, many citizens expressed concern that their religion would be subverted. These concerns were exacerbated once King Ronald officially adopted Catholicism as the national church.

With support from the Old Monarchists, Amon Lasgalen successfully petitioned the King for religious leniency in the county. They were allowed to officially adopt Anglicanism once more, on the condition that they form a new church independent from the Church of England.

The vast majority of adherents are found in the modern county of Amon Lasgalen, although a small exclave can be found in the town of Darlington, located in the nearby county of Teesside.

The Mezerizeb people began under Kozlova, in which they developed an opposition to established power, and a respect for tradition and religion. Eventually, many dissidents formed Yavaria, a rebel state opposed to Kozlova.

Once Sorrenia was formed, the Mezerizeb people continued due to protection from the Governor of Filostonia, although they became a small population of the state. During this time, they established both a language and a church.

The Mezerizeb Church is Methodist, and as such, is almost identical in doctrine to the Methodist Church of Great Britain. However, alongside the typical Methodist beliefs, the Mezerizeb Church also places some emphasis on Sacred tradition, and churches and homes are often more adorned than is typical of a Methodist church. However, this emphasis is minor in comparison to, say, the Catholic Church or Gnostic churches.

The Mezerizeb Church and people operate largely as one and the same, with non-Mezerizeb Methodists mostly attending the British Methodist Church.

Other Christian denominations can be found throughout Sorrenia, however only constitute a very small minority of the population. Nondenominationalism is the largest Christian belief aside from Catholicism, Anglicanism and Methodism. Evangelical churches can also sometimes be found.

The Church of the Latter Day Saints and Jehovah's Witnesses can also be found, however the Papal Directorate defines these as non-Christian churches.

Muslims only ever constituted a small minority in the Sorrenian Federation. With reforms instituted in 2015, they officially organised the Sorrenian Mosque. The Mosque was generally Sunni, and was proudly apolitical, believing strongly in a separation between 'mosque and state'.

Upon the Great Expansion of 2018, the number of Muslims in Sorrenia greatly increased. To accommodate this, the Sorrenian Mosque was reinvigorated. All mosques were considered to be part of the wider Sorrenian Mosque, and a Grand Mufti - responsible for interpreting the Quran - was instituted.

The Mosque remains theologically Sunni, but no longer deliberates on the question of the early Caliphs. The Mosque has also actively called for Shia Muslims to join.

The Mosque is present throughout Sorrenia, with large populations in the cities of Newcastle, Leeds and Bradford.

There is a significant Jewish population in the town of Gateshead, in county Newcastle. Often referred to as 'little Jerusalem', the community consists of several hundred Jewish families, predominantly of Ashkenazi descent.

Various Indian religions can be found in Sorrenia. Areas with a large Indian immigrant population (especially Bradford) will often have Hindu temples. Buddhism is also present in the form of several monasteries, especially in the counties of Northumberland and Great Derwent. Aruna Ratanagiri Monastery - located in the former - is one of the largest Buddhist monasteries in the British Isles.