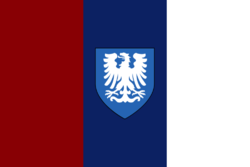 The flag of the Republic of Dradelia

Dradelia is a region contained within the Prince Bishopric of Durham in the Kingdom of Northumbria. It was at various points an independent micronation, a state of the Ashukov Federation, a state of the Sorrenian Federation and a county in the Kingdom of Sorrenia. It is believed to be the oldest micronation in County Durham, and was first founded in 2011.

Though part of Sorrenia for most of its history, Dradelia developed a unique subculture, with its own language, ethnic group, symbols and quirks. Today, the term 'Dradelia' is mostly synonymous with 'East Durham', and much of its Slavic influences have faded with time, replaced by customs specific to the North East of England.

The name is artificial, intending to sound Slavic.

The coat of arms of the Republic of Dradelia

Dradelia was created in 2013 as a unitary republic, and was preceded by Dalton, a small micronation created by Rilgar Ompastre and his uncle in 2011 and usually seen as a forerunner to Dradelia. Dradelia at this time was mostly seen as a way to experiment with conlanging and the creation of flags and emblems, rather than as a serious attempt to secure statehood.

Eventually Dradelia became defunct, as Rilgar Ompastre's attentions turned to the Sorrenian Federation and the Republic of Akebar. The Dradelian government ceded most of their territory to the Ashukov Federation, with the exception of a small allotment of land which became the Viadalvian Republic of Dradelia. This micronation was short-lived however, and just a few weeks later was ceded to the Sorrenian Federation.

Sorrenia greatly expanded their Dradelian claim to encompass the area of Blackhall Colliery and much of the Durham Heritage Coast south of the Castle Eden Dene which functioned as a border between Sorrenia and Ashukovo. After Ashukovo fell into inactivity, Sorrenia claimed the entire Dradelian region with minimal opposition.

Dradelia was further expanded to contain all of Easington, Peterlee, Horden and Haswell Plough. Though most of this area had never been claimed by the original Republic of Dradelia, the move was widely popular among Dradelians, and much of East Durham came to be seen as an integral element of Dradelia. Out of respect for its unique history and culture, Dradelia was granted the status of a 'devolved province' - one of only two in Sorrenia - and the local government was given the power to alter laws and policies relating to social policy, language and culture.

As the Sorrenian Federation became defunct, Dradelia took the opportunity to declare independence. This status quo lasted for several years, when in 2018 the War of the Sorrenian Succession broke out in Bowburn and the surrounding area. Dradelia initially adopted a stance of neutrality, but when the fleeing Socialist League took up residence in Horden, the Dradelian National Army launched an attack known as the 'Horden Carnage'. In retaliation, the Sorrenian Royal Army invaded Dradelia and defeated them in the 'Battle of Good Grace'.

Dradelia was entirely re-absorbed into the Kingdom of Sorrenia, but retained its status as a devolved region. The monarchist government however took steps to introduce Sorrenian culture into Dradelia, which was seen as an assault on its culture by many Dradelians.

Dradelia remained a highly tense region, divided between three powers. The Sorrenian government controlled much of west Dradelia. The Dradelian Revolutionary Front possessed de facto control over all of northern Dradelia, while the Socialist League controlled Horden. The area was seen as a hotbed of dissent, and while the DRF took up seats in the King's Council, they continued to agitate for Dradelian independence and maintained an armed wing which controlled a slither of land surrounding Easington Village and Colliery.

When Rilgar Ompastre, Harry Jones and Martin Aquinas established the Kingdom of Northumbria in late 2020, it was decided that they would not resurrect the old Sorrenian counties, instead creating counties based on geography and historical claims. Dradelia was therefore integrated into an enlarged Prince Bishopric of Durham, which was in fact popular among the Dradelian population, most of whom had become far more influenced by Northumbrian culture, viewing their Dradelian heritage as a peculiarity which no longer warranted independent status.

Dradelia is now seen as an important predecessor to the contemporary Kingdom of Northumbria, and one of two important micronational origins alongside Sorrenia. Though a degree of nostalgia exists for Dradelian language and culture, it has now been mostly surpassed by other influences; 'Dradelia' is now often used as a by-word for 'East Durham', and 'Dradelian culture' may now include North East dialects, cuisine and symbols unique to the East Durham coast, which were not necessarily adopted by the old Dradelian population.

Dradelian culture is largely a conglomeration of many distinct cultures. The Dradelian language is a language isolate, however much of the imagery as well as the use of the Cyrillic alphabet derives from Slavic tradition. From a more historic basis, Dradelian culture has incorporated elements of Anglo-Saxon Northumbrian identity, as well as some Viking influences - owing to its location within North East England.

Upon Sorrenia's takeover of the region, Sorrenian and Dradelian culture were conjoined. Celtic imagery was adopted in line with the state-sponsored Celticism of Sorrenia, and Sorrenian Brittonic became an official language.

Dradelia maintained the largest Muslim population in Sorrenia, and previously incorporated elements of Islamic culture during a period of Muslim rule, most notably the use of the Arabic alphabet. The Cyrillic and Latin alphabets, however, were reinstated following secularist takeover, and the influence of Islamic culture in Dredelia was massively decreased.

The Slavic influences can most notably be seen in the national iconography of Dradelia. The flag utilises traditionally Slavic colours - those being dark red, dark blue and white - and the emblem shows a bird, reminiscent of those used by nations such as the Russian Empire. Such imagery may also be influenced by Ashukov culture, which was itself largely derived from Slavic influences.

The Dradelian language is a wholly artificial language, originally created to be the primary language of the area. It is a language isolate with superficial Slavic influence, utilising both the Latin script as well as a Cyrillic orthography based upon Russian - owing to the influence of Russian phonologyupon the language. The Arabic alphabet was formerly used during Islamic rule.

The language is not widely spoken by the populace, nor was it ever used in official documentation (where English and Sorrenian Brittonic were more common), however it has remained a point of pride for Dradelian dissidents, and was most notably used by the Dradelian Revolutionary Front.

Dradelian cuisine is largely based on meat, fish, offal, seaweed and turnips. The national dish was horse meat, which is traditionally fried and seasoned with chilli powder, and then served with mashed turnips and roasted nettles. Another popular food is tripe with fermented vegetables, which is traditionally served in sauce consisting of blended broccoli and sheep's cheese. Seaweed is easy to obtain on the Durham Coast and was therefore incorporated as a traditional Dradelian staple. Pike and Pigeon meats are also considered traditional in Dradelia; pike is often grilled and cut up into strips and served with the traditional Dradelian vegetables of turnip and nettles or seaweed. Pigeon is traditionally roasted and eaten whole without cutlery.

Carob is traditionally consumed in Dradelia as an alternative to chocolate. It is both eaten in bars and mixed with milk to make hot carob, the old national drink.

The flag of the Ashukov Federation
Retrieved from "https://micronations.wiki/index.php?title=Dradelia&oldid=1234131"
Categories:
Hidden category: