A map of the Teesdale region

The Teesdale Question refers to an historical and political dispute as to how much of the Teesdale region in the Kingdom of Northumbria should be contained within the Teesside county, as opposed to the larger Prince Bishopric of Durham. The Teesdale drainage basin is located within the English counties of Durham and North Yorkshire. The more metropolitan area to the east was similarly divided. Settlements on the northern side of the River Tees (like Stockton-on-Tees) were part of Durham, while towns on the southern side (like Middlesbrough) were part of North Yorkshire. This history is further complicated by the fact that between 1972 and 1996, the area was unified into a new county named Cleveland. This has created an overlapping web of county claims and cultural links.

Upon Northumbria's formation, most of the Teesdale area remained part of Durham, under the leadership of the Prince-Bishop of Durham. Middlesbrough, Eston, Redcar and a number of other settlements located south of the Tees became part of the new county of Teesside. This provoked upset among many local inhabitants, who believe that the cultural similarity of the area warrants a Tees county which extends from Saltburn-by-the-Sea in the East to Middleton-in-Teesdale in the West, unifying the Teesdale-Teesside area. Not all of the contested land is part of the Teesdale region, but is nevertheless considered part of the 'Teesdale Question'.

Durham irredentism refers to a broader movement which pushes for a maximalist drawing of Durham's borders to encompass all the land once held by the Bishop of Durham. This not only includes Teesdale, but also significant parts of the English county of Northumberland, like Bedlingtonshire and Islandshire, which includes the culturally significant Lindisfarne monastery. Durham irredentism is championed by the National Democratic Party and the Christian Democrats. The former, while ruling as the sole legal party, formalised Durham irredentism in the drawing of Northumbria's borders; all of the Prince-Bishop's historical claims were ceded back to Durham, including all of the non-Yorkshire parts of Teesdale.

This new state of affairs has given the contemporary Prince-Bishop of Durham considerable political powers, given he is able to appoint members to the Witan in a manner roughly proportional to Durham's population, alongside a number of Lords Spiritual. With its extended borders, Durham has a population of almost 1mn, giving the Prince-Bishop the ability to appoint eleven of the twenty-five members of the Witan. As a result of this institutionalised power, the Prince-Bishop has been able to secure Durham irredentist philosophy within the NDP and the Christian Democrats, both of whom source much of their support from the Durham area. In return, the Prince-Bishop favours their candidates for the Witan, and also appoints Lords Spiritual who are amenable to those parties' ideologies.

Durham irredentists generally support preserving the status quo - only a small minority support abolishing the Teesside county and absorbing the region entirely into Durham. Most acknowledge that Durham's claims to the south of the Tees are weak, and that integrating the area would likely transform Teesdale irredentism from a regionalist movement into a separatist force. 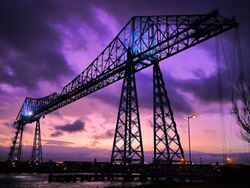 Towns like Middlesbrough, Stockton-on-Tees and Darlington are part of a contiguous Teesside metropolitan area

Teesdale irredentism arose out of the belief that Teesdale and Teesside, due to their cultural similarity and geographic proximity, should constitute a single unified county. The movement is most passionately supported by the Tees Party, formed shortly after the wave of democratisation in January 2021. Running as regionalist Teesdale irredentists, the Tees Party won seats in both Teesside and Durham during the March 2021 general election, suggesting support for their proposals throughout the region. Teesdale irredentists also regularly condemn the significant power the status quo grants to the Prince-Bishop and Durham Council, arguing that Teesdale residents would be better represented in the Witan by electing representatives.

The precise boundaries of the hypothesised 'Tees county' are not clearly elucidated, though almost all Teesdale irredentists agree that it would extend from the eastern coastline to Middleton-in-Teesdale, which would include major settlements like Barnard Castle, Darlington and Stockton-on-Tees. Some recommend the western boundary extends further to Cow Green Reservoir, and potentially northwards to encompass towns like Hartlepool.

The Tees party have made their membership in any coalition government conditional on the extension of Teesside county. Most support a gradualist approach, in which parts of the Teesdale valley are absorbed in sections in return for support for the government. Others recommend the holding of a region-wide referendum.

Aside from the Durham irredentist NDP and Christian Democrats, and the Teesdale irredentist Tees Party, most parties maintain a neutral or ambivalent tone when discussing the Teesdale Question. The Liberal-Green Alliance has recommended holding a referendum in the region to determine the level of support for boundary reform, which has also been endorsed by the Alston Left, though given the LBA lacks any significant support in the region and the Alston Left are only present in the Alston Commune, both do not generally express strong opinions on the matter.

Of all the parties, the Socialist Party is the most internally divided. Socialist MPs are elected in both Teesside and Durham, arousing alarm from the party leadership who worry that too strong a stance on either side may alienate voters. Furthermore, the party's biggest source of support, Sunderland is itself part of Durham due to Durham irredentists, creating some worry that the Teesdale Question may trigger similar debates in other parts of Durham. As a result, the party is officially neutral. Tees-based Socialist Party members are often more sympathetic to Teesdale irredentism and vice versa with Durham-based ones, as may be expected.