The Democratic People's Republic of Kozlova was a micronation formed on the 6th of June, 2012, located in and around the city of Durham in the United Kingdom. It based itself on socialist values, though established a multi-party system with parties on all sides of the political spectrum. Although deceased, Kozlova remains an important part of micronational history, specifically for the Sorrenian Federation and Kingdom of Sorrenia, the successors of Kozlova.

Rilgar attended a school in Durham City, and introduced several of his friends to micronationalism. Enthused by the idea, Martin Aquinas, Dominik of Kozlova, and Lewis Wild agreed to form a micronation of their own, by the name of Kozlova.

Kozlova was envisaged as a socialist state, though one generally dismissive of soviet-style communism, and open to multi-party elections. The project quickly attracted attention from other school friends, such as Llewelyn Lawton, who went on to have a prestigious micronational career. Kozlova saw a burst of attention, and within just a month, had ten citizens, all friends of the original triumvirate. 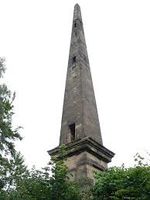 The Levarian Obelisk, mythicized as the spot where the Kozlovan constitution was ratified

Kozlova attracted a great deal of infamy just one month into its existence after the formation of the Kanton Alliance. Shortly after Kozlova's formation, Rilgar Ompastre announced his decision to recreate Dradelia as a state of the Ashukov Federation, at that time a leading micronation within the community.

Aquinas suggested this decision was agreed to under duress, and began to agititate either for Dradelian independence, or its absorption into Kozlova. Caught in the middle, Rilgar attempted to mediate the dispute, reasserting his decision to join the Ashukov Federation, but securing for Dradelia the right to make separate treaties with foreign micronations.

In turn, the Kanton Alliance was formed, between Kozlova, Dradelia, and the Kozlovan-affiliated Principality of Doppeland. The Alliance however did little to appease Ashukovo, who continued to protest at what they perceived to be Kozlovan interference in internal affairs.

Ultimately, the Kanton affair fizzled out, with Ashukovo largely choosing to ignore the matter. Upon Kozlova's rebirth as the Sorrenian Federation, the Kanton Alliance was scrapped, and Dradelia was instead split into two districts, each ruled separately by Ashukovo and Sorrenia.

The initial burst of interest and activity seen within Kozlova carried the micronation through much of 2012, but by October of that year, Kozlova entered a period of stagnation, with many citizens ceasing to actively contribute to the project. These so-called 'lean months' lasted from October of 2012 to January of 2013.

The flag of the Kozlovan military

By Feburary of 2013, prominent citizens in Kozlova began to publicly speak out against the communist rule. Llewelyn Lawton broke away from Kozlova, creating a new spoof nation called Validor. Although Validor stated that they had no qualm with Kozlova, they did begin to urge others to leave, releasing propaganda against the Kozlovan government. Many peripheral citizens who had been inactive for months officially left Kozlova, resulting in a rump state with only a handful of active and loyal citizens. This period of dissent and decline is generally dated from Feburary of 2013 to the Summer Revolution.

During the period of dissent, the third member of the founding triumvirate, Lewis Wild, left Kozlova to found Yavaria. This blow was compounded by Dominik of Sorrenia's leaving. Dominik, also a founding triumvirate member, had been one of the few Kozlovans still loyal to the regime. His decision to leave all but killed Kozlova, and the government's activity completely halted.

In light of this blow to the communist regime, Llewelyn Lawton and Lewis Wild agreed to join their two micronations together, forming Yavoka, with the explicit goal of destroying Kozlova. They began to release anti-Kozlovan propaganda, and also engaged in several instances of wiki vandalism. The formation of Yavoka left Kozlova a rump state, with the two remaining loyal states now divided from one another. Only in the northern town of Chester-le-Street did the Kozlovan government retain control, with all other sectors falling into Yavokan hands.

As the school term of 2013 came to an end, Martin Aquinas announced his decision to disband Kozlova, and met with the Yavokan rebels to discuss terms of surrender. Both parties agreed that a new micronation, worked on by both parties, was desirable, but the rebels demanded the removal of all communist and socialist mentions in constitutional documents, as well as the removal of communist imagery in any state emblems and flags.

Eventually, the government agreed to the rebels' terms, disbanding Kozlova over the summer. In turn, Yavoka was disbanded, as was Validor. Yavaria, the other half of Yavoka however, was recreated as a state of the new micronation.

After several months of deliberation, the Sorrenian Federation was founded. Recognised as the successor of Kozlova, all parties nonetheless went to great lengths to reinvisage the micronation as a non-socialist, multi-party federation. Nevertheless, in the micronation's first elections, held on the fourth of November, 2013, the new Socialist Party won a majority of seats in the National Assembly.