The Papal Directorate acts primarily as an Ecclesiastical court, tasked with the application of Catholic teaching in Sorrenia. 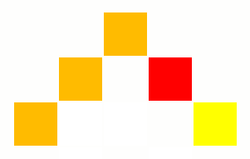 It also combines key elements of a modern legislature, with partisan presence, an official government and opposition presence and the practice of deliberation and voting.

Sorrenia has always had a tradition of strict secularism, with the government going so far as to ban any party from utilising religious imagery. This tradition remained strong during the Sorrenian Federation, despite some opposition from the right-wing.

Upon Ronald's ascension, several choices related to religion were open to him. The Republicans, NDLP and Libertarians all strongly urged him to retain Sorrenia's history of secularism, citing the fact that Sorrenia is markedly pluralistic when it comes to religious affiliation.

Many in the New Monarchists urged him to establish a church in the Anglican Communion, given that this is the most popular religion in Sorrenia and the United Kingdom.

Finally, the Old Monarchists largely urged him to adopt Roman Catholicism as the official religion, given Ronald's own belief and the North-East's history of retaining Catholic beliefs during the Henrician Reformation. This also received tacit support from the Dradelian Revolutionary Front.

On April 12, the King's Council ratified a bill establishing the Roman Catholic Church as the official church and religion of Sorrenia. The Papal Directorate was formed on the same day to apply Catholic teachings within Sorrenia.

The Directorate is able to pass legislation on any ecclesiastic or social issue.

A proposed bill may not come to a vote unless the proposer has cited both evidence from the Bible and the Catechism, justifying the application.

The King is granted a veto on any bill that is voted upon.

Members are appointed by the King, and retain their seat until resignation or death. Members can only be prematurely removed if they commit a crime.

The Papal Directorate is made up of five members, all of whom must be in communion with the Catholic Church and possess a working understanding of the Bible and Catechism.