In the Popular Union of Occitania, everybody, occitanian or not, may be a candidate by completing this form. The first closing date for applications was the 1st November 2017. The government has extended this date to November 7.

General elections are held every six months in Popular Union of Occitania. Each party chooses a candidate by "constituency". The party who has the majority of deputies sees its chief become president by a second election. With this system, the President of Occitania is the leader of the Legislative and executive, he is the head of the Vergadering and head of the Government. Thre are four constituencies in Occitania (Midi-Gironde, Iberia, Septemtrio and New World). In addition to these four constituencies, in each federal republic, one person is elected to represent it in the Vergadering. A person can have several mandates.

Logo of the elections

In the Federal Republics

On June 22, the occitanian authorities opened the official campaign for the elections.

On August 14, Babou Chkaya begins its campaign in Shalom. Two days later, he announces that this will be his last presidential campaign.

On October 18, Vicent Branchadell candidate in the Iberia constituency, has create his own party, Montserrat which is allied with Esquerra!. Together, they had created a new coalition: Union of the Left. Fighting Poland joined this coalition too. 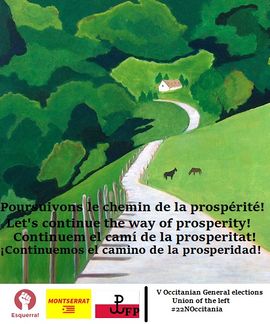 Election poster of the Union of the Left coalition