The Occitanian general election, May 2017 was the 4th General election of the Popular Union of Occitania. The elections were take place on 22 May 2017.

In Popular Union of Occitania, everybody, occitan or not, may be a candidate by completing this form. Registrations are closed on May 1, 2017.

Elections are held every six months in Popular Union of Occitania. Each party chooses a candidate by "circumscription". The party who has the majority of deputies sees its chief become president by a second election. 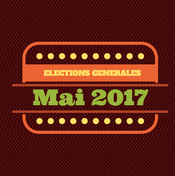 Logo of the elections.

Babou Chkaya announced his candidacy on January 29, 2017, for the Socialist Party. Four other parties subsequently appeared.

On February 2017, the Radical Party had sent fakes applications by usurping identities. This party was prohibited after such actions.

On February 26, 2017, Edwin Farrar wrote a Official statement about the general election. Edwin Farrar believes that this will be the toughest election ever in the 'UPO'. Edwin Farrar was confirmed as leader of the DPRP after the North Farrar Election on the 26th February. This party was forbidden by presidential decree on March 7 [1].

On April 13, a new party is registered, the Party of Industrialists and Peasants. On April 20, the Democratic Union party is dissolved.

On May 2, Chkaya proposed an agreement after the disclosure of the electoral program of Juan Cisneros, who accepts it.

On May 11, Babou Chkaya and Ivanna Minaïeva organized a meeting in Shalom.

After the election of the three deputies, they will elect the president.